FACES OF THE DEAD REVIEW 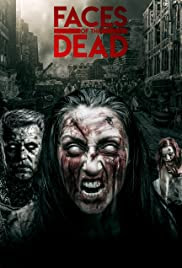 Dr. Boobenstein hosts the ultimate zombie anthology film. She brings you 5 tales of undead terror with some big surprises along the way.

“Faces of the Dead” is truly an indie horror effort. Before it gets to Dr. Boobenstein (Rebecca Rinehart), and the short films, they get a cool backing by Lloyd Kaufman and a surprise guest. Then the audience gets a short that combines a sign of our quarantining times, and horror. Two friends video chat until something takes over one of them. It’s not a bad start, and displays people can still make horror while stuck at home.
Finally, Dr. Boobenstein makes an appearance, but she’s not what you might expect. She has on much more clothing on, at least at first, and doesn’t scream doctor. There’s no great story to tell about her, as she adds her own touch of humor to the beginning and ending of each short film. That’s right, she the host of this anthology of five horror films.
‘District Dead’ is the first story, and one of the longer ones. For a while it follows a guy in the apocalypse before showing how the apocalypse begins. They do a lot to give the audience a little action and drama mixed together. There’s a decent fight scene in the forest, and another inside an apartment building. This one seems like it could’ve been part of a bigger story, as it ends with what feels like more story to tell.
The second film, ‘They Approach,’ might lean a little more to the paranormal then zombies. A young girl is able to see dead people, or zombies in her giant backyard. Her friend and family can’t see them, even as much as she insists they’re there. It isn’t until night time that something happens that gives this film a solid ending.
‘Killer Brainiac’ is the third story, and this one hits a little close to home. Why…well because it’s about a killer who kills people who give bad reviews of a certain movie. Hopefully I don’t ever have to review that one. As for this one, the premise is definitely fun, but a little awkward when the killer makes the first kill. It seems they should’ve separated the reviewers before the killer strikes. Regardless, the reviewers got what they deserved.
The fourth story is ‘Love Letters from the Grave.’ This might be the most depressing of the short films. It’s about a guy who finds a love letter from his beloved and departed Mary. He decides to write her back, and the two exchange several letters. While the audience gets to see the guy in action, he narrates his story in a very touching way. Yes, short on horror to start, but it eventually makes up for it.
To finish things off is ‘They’re Coming to Get You.’ Of course the title should ring a bell, and make you notice something is missing. Well, the filmmakers nicely finish off the phrase by the end of the film. It starts off a little weird trying to explain what zombies are, but gets down to things when it follows two survivors. They’re well equipped to survive the apocalypse, and are fine until they decide to save a woman. Unfortunately she’s carrying some baggage that ends their ideal situation, but punctuates the title of the film.
“Faces of the Dead” is indie horror that you might come to expect with it’s good and bad. Each story is solid, with one or two maybe needing a better ending. There’s a good mix, giving fans zombies, killers, action, drama, and even a little love. There’s blood and guts, both with the much appreciated practical effects, and some with the less wanted CGI. A big surprise is Dr. Boobenstein, who turns out to actually be a pretty funny host. While not big budget perfect, these filmmakers did a lot of good things, so I give it two pools of blood.