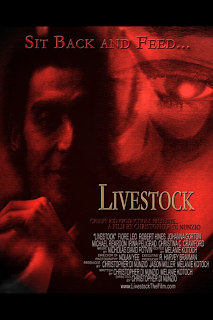 The movie opens in the back of a car with Edgar (Robert Hines) telling Victor (Flore Leo) that he has a chance to move up in the company. Victor just needs to continue proving that he is a value asset, including taking care of the business at hand. As the opening scene unfolded I wondered is this a mob story? It comes off that way early on, and slowly gets more and more into horror as it goes on. It is one of the things that work so well for the movie.
After the mob like opening, the audience gets to meet three women, Annabel (Johanna Gorton), and Tina (Christina C. Crawford) in particular. This introduction seems a little odd, but it is still early in the movie. Annabel is having trouble in the dating world, while Tina is looking to move up in the business world. Annabel hopes Jerry (Matthew Phillion) is the answer to her dating woos, as they are set for a second date. Tina meets Victor, who has an opportunity for her in his line of business.
Anthony (Michael Reardon), who works under Victor, isn’t on top of things like Victor. His task is to capture someone who might not be missed such as a homeless guy, or prostitute. Instead, he kidnaps Annabel and Jerry while they are out on their date. Apparently they are kidnapped for some kind of ritual that is going to take place. When Victor finds out that Anthony picked the wrong kind of people, he is the least bit pleased. What is pleasing for horror fans is what eventually happens to Annabel and Jerry.
The story comes together when Tina joins Victor for an important dinner. Edgar welcomes Tina, and hopes that she will become a valued member of their team like Victor. I’m not going to give away what happens, but it definitely puts an exclamation mark on things. My only problem with is that it feels like only the beginning to the story. It leaves you wanting to see what happens next for this group of people.
Overall, this movie does a good job of creating a gangster like atmosphere while including enough horror. It keeps the audience on their toes, as they aren’t sure where this is all headed. The acting isn’t too bad with a strong performance from Flore Leo. While the ending is satisfying, it kind of felt like this is only the beginning, at least for Victor and company. With that said, I give this movie 2.5 pools of blood.
HorrO
Posted by HorrO at 2:35 PM No comments: 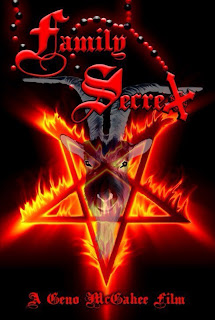 Does every family have a family secret? I don't know about that, but this family sure did. That is what Geno McGee tries to figure out after the death of his grandmother. The death sparks a string of murders in his family. The problem is his dead grandmother is apparently committing the murders. How can that be? Maybe the family secret is the answer.
While there is a major family secret in this movie, there is one thing that isn’t a secret… this is an absolutely crazy family. There are so many of them, I can't get into describing each, but here are some you need to know. Obviously there is Geno played by Forris Day Jr. Forris does one of the better acting jobs in the movie. It may take some time, but I think you will come around to rooting for him to solve the crime. Then there is Gary (Alex Pierpaoli), a crude character that isn't afraid to tell anyone what he thinks of them. Trust me, he doesn’t have too much nice to say.
Most importantly, there is the killer grandmother. What is there not to like about a grandmother that goes around killing her wacky family members? Grandma's favorite tool is a meat cleaver, which she makes good use of. There are some descent kills, including a multi-kill scene I call, "Massacre at the Bowling Alley!"
Overall, the family alone makes this an entertaining movie. Yes, some get more screen time than maybe they deserve, but their clear annoyance for each other is fun to watch. They say everything that sometimes you wish you could say. Grandma McGee is a pretty scary looking grandmother that makes good enough use of her meat cleaver. Ultimately it is all about figuring out how grandma can be the killer when she is supposedly dead, and what she has to do with the family secret. I give this movie 2 pools of blood!
HorrO
Posted by HorrO at 12:55 PM No comments: 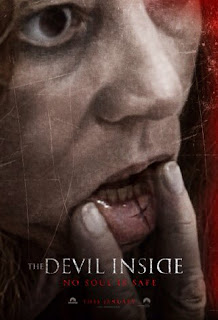