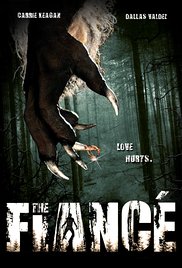 When a beautiful bride-to-be is bitten by the legendary creature, Bigfoot, she becomes a brutal force of nature hellbent on breaking her engagement - and her fiancé.

Directed and written by: Mark Michaels

With “The Fiancé” as the title, it’s hard to image what that has to do with horror. At most, it would be predictable to think that this might be a story about a relationship gone wrong because of something like cheating. Yes, this relationship has gone wrong, but for a much more unpredictable reason. Let just say that Bigfoot comes in between this couple.
It opens with some strange happenings in the woods, as two guys have gone from being the hunters to being the hunted. Soon after this attack, the audience is introduced to Michael (Dallas Valdez). He’s preparing to propose to his girlfriend, Sara (Carrie Keagan), and drives up to the cabin where the big night is supposed to happen. Unfortunately, things take a turn for the worse because she’s become infected and comes to the cabin not to say “yes,” but to kill him instead.
This is where the movie really gets interesting for two specific reasons. Of course the first reason is the extremely brutal fight the two have. They go back and forth, as he’s fighting for survival, and she’s fighting out of pure rage. She has the advantage with this animal like strength obtained from the infection, and the fact that he truly doesn’t want to hurt her. He has to loss a few extremities along the way before deciding to really let her have it.
The other reason is how the story is constructed. Instead of going through the couple’s history before getting to the fight, the audience gets pieces of their story in between all of the fighting. The audience sees a little bit about how they met, and then an introduction to Sara’s father. Michael ends up in an usually situation with his possible father-in-law that becomes a surprising side story. There’s also a touch of comedy thrown in to break the tension with two cops called to this domestic dispute, but have something better to do.
Just when the audience thinks it’s over, it’s not. “The Fiancé” has a few more surprises to the story, including bonus scenes at the beginning and at the very end of the credits. The scenes put the final touches on this well constructed story. Instead of having a beautiful night together, this couple has a beautiful fight together truly putting the horror in this story. Big Foot might have gotten in between this couple, but he won’t get in my way of giving this movie 3 pools of blood.

HorrO
Posted by HorrO at 2:12 PM No comments: 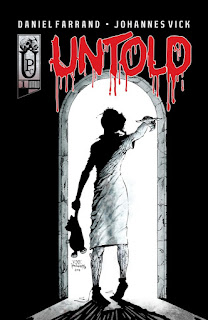 *Find out more about ‘The Untold’ on Twitter/Facebook
Posted by HorrO at 11:03 PM No comments: 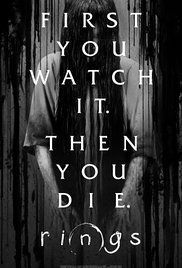 A young woman finds herself on the receiving end of a terrifying curse that threatens to take her life in 7 days.

It’s always exciting when a horror movie gets off to a good start. “Rings” appears to get off to that good start when it opens with Samara (Bonnie Morgan) on the hunt for her latest victim on an airplane. That seems like a great unique place to have her, and just when it gets good… “end scene!” Seriously! After that let down, would that be a sign of things to come?
Soon after that the audience is introduced to a young couple, Julia (Matilda Lutz) and Holt (Alex Roe). It’s their last morning together before Holt goes off to college. College can be about experimenting and finding new things, and that’s exactly what Holt does. He breaks contact with Julia causing her to eventually go to his school to look for him. She soon finds him, and how he’s become part of a deadly experiment. Yes, he watched the tape and to save him, so does she.
However, there seems to be something different about her viewing of the tape. This causes Julia to go on the hunt for Samara, and the story behind her. This is also where the story begins to drag on. The audience watches as Julia tries to put the pieces together, where instead it would've been nice to see more of Samara going after people, or even more about the experiment itself.
Then comes the big final scene once Julia has put all of the pieces together. It won’t take long for some of the audience to say, “wait didn’t I already see this movie?” Even though they might have seen it, it does kind of make sense, and turns out alright. Actually the very last scene turns out to be a good ending to this story.
Reminiscent of “Final Destination,” the opening scene has a chance to really set the tone for this movie, but unfortunately it’s cut short. They also cut short the talk about this experiment, which would have been more interesting than Julia’s investigation. As well, it would have opened more opportunity to involve Samara. Even though the ending is awfully familiar, it does make up for some of the earlier mishaps. However, “Rings” still turns out to be a missed opportunity to revive this franchise, so I give it 2 pools of blood.