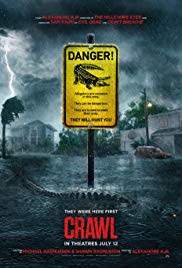 A young woman, while attempting to save her father during a Category 5 hurricane, finds herself trapped in a flooding house and must fight for her life against alligators.

As a resident of the Sunshine State, “Crawl” presents a movie that’s all too real. We're faced with the possibility of the devastation from a Category 5 every hurricane season. Also, we’re all too aware of the dangers that alligators present anytime we’re near lakes, canals, and even swimming pools. Now combining the two raises the dangers to a whole new level!
Haley is a swimmer for the University of Florida, as in the Florida Gators (haha). After practice her sister calls asking her about their father, Dave (Barry Pepper). Since neither of them can reach him, Haley braves the oncoming hurricane to drive out to his house. This search for her father lets the audience in on some the of family issues, but on the bright side brings the family dog Sugar into the equation. She eventually finds him in bad shape under the house along with some unwanted house guests.
The movie does a nice job of capitalizing on the combination of gators and the hurricane. The suspense is continuous because the water continues to rise, and the tension is high because the audience never knows when a gator will attack. The basement is a great place to start the struggle to survive, as it provides challenges for both the gators, and Haley and Dave. It’s probably the time where the audience gets the best clean look at the gators, and they’re big and vicious.
As the movie moves along the CGI kicks in, and it will be up to the audience whether they go for these gators or not. It seems like they do an alright job, especially since it’s clear the movie tries to cover its bases when it comes to gators. There is a gator nest, gators hunting underwater and at the surface, hunting alone and in groups, and of course the gator death roll. They never go too far, and keep it reasonably realistic. Probably the most unrealistic thing is how the father and daughter continue to survive their injuries.
Overall, “Crawl” is just one of those summer movies you sit back, and enjoy what’s presented. Sure, there are a couple of things to nitpick at, but why bother? The hurricane and gators bring the audience a tense and suspenseful ride. There are some good brutal deaths, and a decent family story thrown in to help the audience root for the father and daughter. If anything, dog lovers can sit on the edge of their seats, and wonder how in the hell this dog is going to make it out alive! With that I give this movie 3 pools of blood, and hope I continue to avoid both hurricanes and gators! 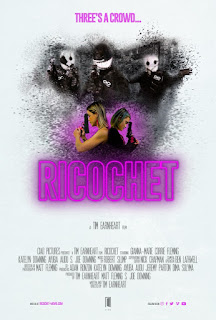