THE CABIN IN THE WOODS REVIEW 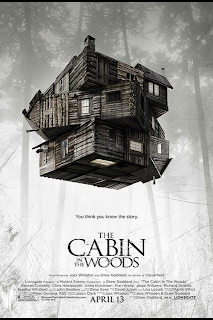 *There should be no spoilers here besides maybe a small hint, but you might want to be careful reading this if you haven’t at least seen the trailer*

Five young adults decide to take a break from college, and head up to a cabin in the woods. Shockingly, they stop at a run-down gas station, and have an encounter with the typical creepy attendant. Of course the attendant isn’t happy about them asking for directions, but they ultimately find their way without his help. Horror fans have seen this situation over and over again, but this time are promised something different. So will “The Cabin in the Woods” go down as an original horror movie, or is it really just more of the same?
Before seeing this movie, there were two things I planned on looking for: 1) obviously how could this movie really be different, and 2) did the trailer ruin parts of the movie. Let me start with number 2. After seeing the trailers, I immediately took issue with certain scenes because they seem to give away too much. Part of it was the assumption that this movie couldn’t be that different. Honestly, I was ready to rip the movie for what they show in the trailers, but it wasn’t as bad as I thought. The trailers don’t give away enough for the audience to guess what is exactly different with the movie.
However, there are still some scenes that they shouldn’t have shown. For one, fans can tell who survives until the dramatic conclusion of the movie. Horror fans probably could guess who would make it to the end, but that doesn’t mean they should just give it away. There is also an invisible electric fence that is shown both in the trailers, and early in the movie. Later in the movie, there is a big scene involving the fence, which would have been so much more shocking if the audience didn’t know the fence is there. There are one or two other things that might have been better off keeping hidden, but I can’t mention them without giving away too much.
Now to the task at hand: how to explain what is different about this movie without giving it away? Well, lets start with some of the things the audience already knows. As previously mentioned, there are five young adults that head off to the cabin. There is the good-looking jock, Curt (Chris Hemsworth), and his playful girlfriend, Jules (Anna Hutchison). Curt and Jules bring along their friends, Holden (Jesse Williams) and Dana (Kristen Connolly), in hopes of uniting the two. Last but not least is the constantly stoned Marty (Fran Kranz). What is different about these five characters? Not a whole lot, but there is certainly a difference in the acting. Sometimes I want the characters to die simply because they are killing me with the bad acting. These five never give me that feeling, and Fran steals the show with his hilarious character.
From the trailer, the audience sees that there are two guys watching what goes on in the cabin. Who are these guys, and why are they watching them? Well, I can’t really say why they are watching them, but I can tell you who they are and how they make this movie different. First, they are the tandem of Sitterson (Richard Jenkins), and Hadley (Bradley Whitford). More simply, I refer to them as the Bevis and Butthead of the movie. Basically they make the movie different because at times it almost feels as if they are in a separate movie. There is the typical horror movie stuff happening at the cabin, and then a paralleling comic relief movie playing along side of it. It won’t take long for the audience to realize the movie is going to go down this road, as it has an extremely awkward scene to start off with.
As the audience would expect, a killer(s) will attack the group, and some of the characters won’t make it. The killer(s) is scary enough, and should please certain horror fans. Also, the killer(s) is pretty brutal, and there are some good deaths. And if horror fans are looking for some blood to be spilled, they will certainly get that in one of the best scenes of the movie. What is different with the horror here? Can’t really say except that in the end, the horror really isn’t that different, but that is the beauty of it all.
In a time where a lot of horror fans are complaining about the choices of horror movies that hit the big screen, this movie really aims to bring fans something different, and unexpected. As one of the taglines say, “You think you know the story,” and that is part of the point here. There are several things that are different about this story, but it might be what is familiar that will ultimately determine if horror fans like it. There is plenty of creativity with the unique storyline. My only complaint with it is that while the ending might have been fitting for the story, it might have been a bit much.
Overall, the trailer didn’t give away as much as I thought, but still manages to ruin a few things about the movie. The acting is pretty good, and the movie is funnier than expected. Horror fans will get some descent deaths, and a great deal of blood. Yes, the movie proves to be different and original at the same time, as the biggest surprise might not be what is different about this movie after all. Love, or hate what they have done here, but it will definitely be a movie that horror fans will be talking about for a long time. I hope I didn’t give away too much besides maybe a minor clue or two. I give it 4 pools of blood.

Email ThisBlogThis!Share to TwitterShare to FacebookShare to Pinterest
Labels: The Cabin in the Woods Review 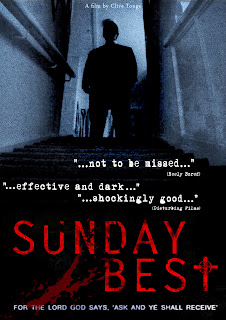 Story:
"A woman’s thighbone has been found by police, the latest victim of brutal serial killer ‘The Bone Stripper’.
When a stranger, covered in blood, arrives unexpectedly at Gladys and Albert’s house, like good Samaritans they invite him in.
But the Lord God works in mysterious ways and, when all three end up wearing their Sunday best, His deadly word is final."
Right off the bat the audience can tell this short film is going to be well shot. It's blue-gray look gives it a dark and creepy feel. Throw in an early scare, and this short film starts off well.
Some tension, and suspense starts to set in once the stranger is welcomed inside the house. You would hope to find a normal person in the room, but not on this day. I'm not to give away what happens from here on out, but it is filled with blood, guts, and the unexpected.
The combination of it being a short film, and not a whole lot of dialogue makes it hard to judge the acting. However, all three actors do a fine job with what they're given. Watching it a second time gave me a better appreciation for the script. There are a few subtle clues that make this story complete.
The film accomplishes a lot for being only about 6 minutes long. Throw in the fact that the film was made with a budget under $1000, and it makes it that much more impressive. “Sunday Best” will be hitting film festivals soon, and I expect audiences will be pleasantly surprised with what they see! I give this short film 3 pools of blood.
HorrO
Posted by HorrO at 12:09 PM No comments: