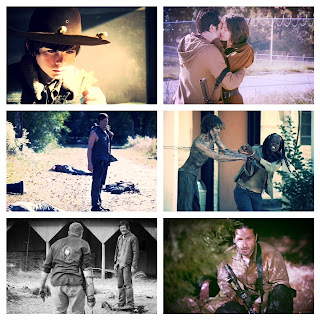 I can't believe the season is over already. It only feels like they got to the prison yesterday. 16 episodes are simply not enough for this amazing show. Anyway, I thought I would share a few thoughts, and pose some questions about the season finale and possibilities for season four of The Walking Dead.
Let me start with something we all think about before each episode: who is going to die? With what happened last week and all the deaths so far, I'm not sure if we will see any in the finale. If I had to pick someone to die it would have to be Andrea, but I'm not sure that's happening now. I think either Andrea or Michonne will eventually die with the other watching kind of like they are setting up either Maggie or Glen to die. It's all about being dramatic.
They could kill off any member of Tyreese's group, which I wouldn’t mind as they are just taking screen time away from characters I’m much more interested in. As for the group, I don't think anyone would miss Beth, and Carol hasn't done much lately. And then there is the Governor. Yes, I wish death upon him, but he can't just be shot, or turned into a zombie. He needs to be tortured first. Then turn him into a zombie, and make him one of Michonne's pets. Sounds good to me, but I don't think he dies in the finale. We might have to wait until next season for his death.
So what exactly are we going to see in the finale? If you know me, you know I want to see a huge battle between the two sides. However, that doesn't look like it is going to happen. The group looks like it might hit the road, which isn't a terrible move. The Gov.’s army clearly out guns them. Another reason why I think we see the Gov. next season. Running isn't going to solve the problem. As long as Michonne is with the group, the Gov. will hunt them down. That and the fact that he is nuts.
Maybe the group surprises us all and has a trick up their sleeve. Highly unlikely since Rick's decisions seem to cost people their lives. I look forward to seeing what happens when fan favorite Daryl returns to the group. Is he in condition to fight? Did he realize his brother was shot before becoming a zombie? Will he blame the Gov., or even Rick for starting the chain of events? How he feels is going to play a key role in the group's survival. And another return...Michonne's long walk back to the prison. How will she feel about Rick almost giving her up? I'm sure Daryl will have some questions for her. Whatever the differences any of them have they better get over it in a hurry.
Last season ended with the introduction of Michonne, and a view of the group’s eventual new home. Will we see a new character appear? I’m not sure this is the setting for that, although I think the group will need some new people after losing so many this season. Maybe Tyreese and Sasha join them. They will definitely need a new home if they leave the prison, but where to go? If the Gov. lives on, they will have to go far. Do they have enough gas for that? The prison was a cool place for them to be, so I will be interested to see if they can find something that can top that. The farm kind of got old fast. Well enough of my rambling. I hope you enjoy the finale, and maybe we can talk about afterwards.

HorrO
Posted by HorrO at 8:00 AM No comments:

Email ThisBlogThis!Share to TwitterShare to FacebookShare to Pinterest
Labels: Thoughts and Questions for the Season 3 Finale of The Walking Dead 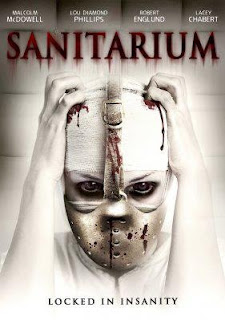 “Sanitarium” is a feature motion picture that consists of three tales based on particular patients of a mental institution. Each tale begins with Dr. Stenson, the primary physician at the Sanitarium, commenting on the recent arrival of a new patient. As Dr. Stenson speaks, the individual’s story begins.

The first tale is about Gustav (John Glover), who is a unique artist. He designs some small dolls for an art exhibit that are more to him than just his work. The dolls are his friends, and apparently talk to him. When the dolls feel threatened by Gustav’s friend Sam (Robert Englund), they give Gustav some extremely bad ideas.
This tale gets the movie off to a good start because it’s the best of the three tales. One of the biggest reasons why it’s the best tale is because of John Glover’s performance. Audiences might remember him as Lex’s father on Smallville. He masters Gustav’s unusual behavior, and never gives away what is to come. The twist is well hidden, and who doesn’t like some creepy little dolls.
The second tale centers on Steven (David Mazouz), a young shy boy. His mother has passed away, and his high strong father is left to raise him. His father orders him around, but if he disobeys there is a belt whipping waiting for him. Things start to get weird for Steven when he starts to see a figure that is apparently following him around.
There are a few problems with this tale. One is that the pace is too slow. They take too much time showing different aspects of Steven’s life. Once the end comes, the audience gets the point, so there isn’t a need to prolong it as much as they do. Another problem is Steven and his friends are clearly in middle school, but they portray the kids as being older, including showing “High School” in the name of their school. On the bright side, the figure that follows him around is a pretty cool looking creature once it is revealed.
The final tale stars Lou Diamond Phillips as James Silo. James is a professor, who is an expert on the Mayans and their prediction of the end of the world. He even builds a bucker for his family and him to survive in when the time comes. That time does come, but not necessarily in the manner James thought it would.
Another tale that is just too slow. They constantly show the same scenes over, and over giving the audience a little more information each time. Again the point is taken, but they do it one too many times. Like the other tales there is a twist in the story, but this one seems to be the easiest to figure out… or is it. There is a small bonus scene after the first part of the credits that will leave the audience wondering what really happened.
A sanitarium makes a good backdrop for this kind of movie. Malcolm McDowell serves as the perfect lead doctor for a sanitarium, and narrator for the story. However, it would have been nice to see the tales have a little more bang to match that sanitarium feeling. Yes, each main character proves to be crazy, but the tales don’t match that crazy feeling because they take too long to develop. Each story has a twist, some better than others. The first tale stands out above the others from top to bottom. It also has an excellent performance from John Glover. I give “Sanitarium” 2 pools of blood.