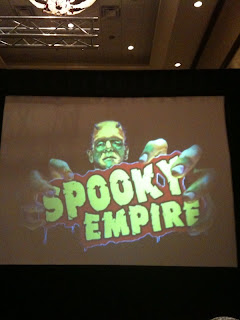 When I pulled up to the hotel and saw a line of hearses parked in the lot I knew we were in the right place. Let me start off with a brief overview of the events that took place over the 3 days, and then I will get into more specific details about the events I went to. There were several workshops/discussions about things such as, writing, horror makeup, and even the Florida Skunk Ape. Movies were shown all weekend including titles such as, “Creepshow,” “The Blob,” and “Halloween 2.” There were Q&A sessions with celebrities like Linda Blair of “The Exorcist,” Shannon Doherty, and Tippi Hedren of “The Birds.”
Overall, it was a fun atmosphere with tons of horror fans scurrying around from early in the morning until 3 in the night. The convention started off Friday with a performance of Michael Jackson’s “Thriller” and a zombie walk (sorry to say I missed it). Plenty of characters roaming the halls to take a picture with, if you dared. 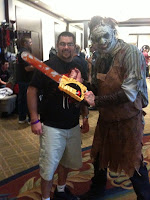 One girl, dressed as the girl from “The Ring,” crawled through a make shift TV, and chased after a little girl in typical Ring fashion (just missed getting this on camera). At night, a band played by the pool, and there was a special auction for charity. A signed Jason machete, a signed box with Chucky in it, and even a coffin were just a few of the great horror items auctioned off. At one point, a Michael Myers character crossed paths with a Darth Vader character. Awkward as Vader turn on his light saber and Myers flashed his knife. I finished off the night with a midnight showing of “Trick or Treat.” I will not be doing a review now because I was too tired while watching, but I will say I liked the movie and hope to see it again.


Saturday started early in the morning with a quick bite to eat and then off to a writing workshop. Where else besides a horror convention will you see a guy covered in blood having his bagel and coffee with a chainsaw on the table? Back to the point, the writing workshops (Writing Horror 101, the Pillars of Writing part 1&2, and Getting Published 101). I know, not exciting, but if you are an inspiring writer you would find these very helpful. All of the speakers had good information to share, and were willing to answer your questions even after the workshop. I would say some of them talked a little too much, which left less time for questions from the audience.
Okay, on to more fun stuff like the dealer room. It was full of so many awesome items that I do not know how I had any money left over. I got a few funny horror themed t-shirts and some autographed pictures. Other booths had art, people promoting their films or stories, or movie posters and action figures. The prices were not too bad (hint wait to the last day if you can as some vendors cut prices to get rid of stuff).
Next, I went a Q&A session with Derek Mears (most recent Jason) hosted by Jason Mewes (Clerks). I did not know how funny a guy playing Jason could be. Both of them basically put on a comedy act while answering questions. I met Derek later on in the autograph room, and got a picture and autograph. 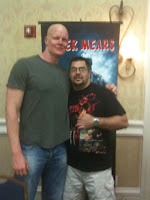 He was a super cool, nice guy. I hope he gets a role where you can see his personality. I also attended a Q&A with Steve Gonsalves and Dave Tango of the Ghosthunters. They took a lot of questions from the audience. We got to learn about how they got into this line of work, the places they visited, and a new show they have coming up.
Looking for horror celebrities to get an autograph from? Well, there was plenty to choose from. Bill Moseley, Linda Blair, Dick Warlock, and Shannon Doherty to name a few. The person I think I was most shocked to see was Danielle Harris. Not for any special reason other then I was shocked to see her grown up. For those who do not know, she was the little girl from Halloween 3 that Myers spent most of his time chasing around. Also, we saw her at a showing of a new movie she was in (more on that later).
In the evening, we went to the Spooktacular Stuntshow. This show basically was about Satan and some book he needed to protect, which was an excuse for some bad guys to fight some good guys. The fighting was not bad considering they were on a small stage, and in costumes. It was not all fighting, plenty of jokes and cursing too. It was similar to the Bill and Ted show at Halloween Horror Nights for those that have seen it.
One thing that I thought was really cool, and something I have never experienced was seeing and being near the celebrities while doing regular things. For example, at dinner, Kane Hodder was having drinks at a table across from us. It was even funnier because our server apologized for not bring us our drinks because he was busy taking a picture with Jason (Kane). Breakfast the next morning was the same. Lots of celebrities were there at the same time eating. It was just weird, but also cool to be around that.
At midnight, we saw the before mentioned movie with Danielle Harris in it. The movie was part of the Freakshow Festival that went on all weekend long. The festival basically showed lower budgeted movies, and gave out awards for best movie and actors at the end of weekend. The only complete movie I saw was this one, which was titled “The Black Waters of Echo’s Pond.” Not a bad movie, acting was as expected from that type of movie, but it had a good twist at the end. I saw pieces of some of the other films, and have to say it was good to see what ideas people come up with. Of course, they would have been better if the acting was better.
Sunday was not as big of a day from my standpoint, but there was still plenty to do. After one of my writing workshops, I attended a Q&A with actors from Halloween 2 particularly Dick Warlock. I was interested in finding out what they thought of the new Halloween movies, but none of them had a strong opinion of them, or they had not seen it. Other than that, they answered some questions, and had some funny stories about themselves on the sets of their different movies.
Yes, I then attended another writing workshop. After that, while other events took place, I spent more time in the dealer and autograph rooms. I saw Kane Hodder with a Jason mask (a cheap one but still cool), and had to have an autograph. So after getting the mask autographed, I took a picture with him and one of his victims in the movie. To make the picture cooler, they pretended to choke me. Word of advice, they do not pretend. They were choking me for real. Take the picture quickly! I thought I was going to be Jason’s latest victim. 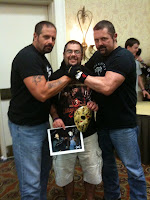 Overall, I had a great weekend. It was a new experience for me, which I hope to get to do again next year. I definitely recommend staying in the hotel so you see all the celebrities hanging out. I hope this overview of the events I attended, and what happened shed some light on what happens at one of these conventions if you have never been. I also hope you enjoyed some of stories. More pictures and video will hopefully be up soon. I hope you enjoy them as well! And by the way, the event gets 5 pools of blood!
HorrO
Update: To see my photos of the event, visit my Facebook page at www.facebook.com/horrosreviews and to view videos from the event visit my you tube channel at www.youtube.com/user/horrosgoryreviews
Posted by HorrO at 2:01 PM