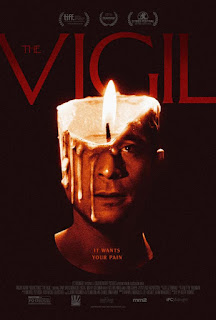 A man providing overnight watch to a deceased member of his former Orthodox Jewish community finds himself opposite a malevolent entity, in writer-director Keith Thomas’ electrifying feature debut.

Directed and written by: Keith Thomas

“The Vigil” has a job opening not many would apply for. Yakov (Dave Davis) is down on his luck, and short on money. He’s trying to find his place again in his community, and not sure where he stands religiously. While leaving a community meeting he’s met by Reb Shulem (Menashe Lustig), who has an offer for him. An offer that based on his financial troubles he can’t afford to turn down.

As for the offer, it’s to watch over a dead body for a night. This doesn’t sound like a great job, but it’s part of a real Jewish tradition. Yakov will be playing the role of Shomer, and watching over the body of Mr. Litvak. It’s more for the protection of the soul than the actual body. He also will be spending the night with the widow, Mrs. Litvak (Lynn Cohen). She’s a little strange, but soon enough he’s going to find out how strange things can really get. 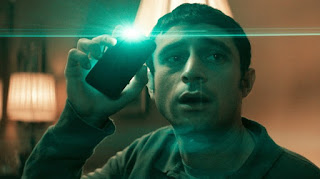 This tradition sets up a terrific horror story. Horror fans can just imagine how many things that could go wrong watching a dead body overnight. The demon or spirit here might have been haunting Mr. Litvak while alive, and now is looking to torture Yakov overnight and possibly longer. The hauntings start slow, but becoming more aggressive as the night rolls on. A combination of lighting and sound effects help the jump scares keep the audience on edge. More fun might even be the random appearance by Mrs. Litvak when Yakov least expects her.

While the scares are what the audience is looking for they’re also going to get two particularly good performances. Lynn doesn’t spend a lot of time on screen, but she brings out all the oddness that makes up Mrs. Litvak. The audience will be homed in on every word she says. Obviously the other performance comes from Dave, who spends a lot of the film’s important moments alone. Alone, or often reacting to whatever the demon is trying to do to his character. He might be at his best when Yakov finds that he can’t run from the house and comes crawling back, and in a big show down with the demon in a tight hallway. 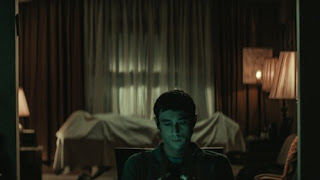 Fans are constantly on the hunt for new jump scares, and “The Vigil” is going to do its best to give them some good ones. It certainly will have the audience on edge, but might not ever get to the level of say “The Conjuring.” Dave and Lynn put on some great performances each with their own challenges. What really separates this film from others is the Jewish tradition the plot is based on. After seeing this horror fans won’t be jumping to watch over dead bodies anytime soon. With that, I give it 3 pools of blood!