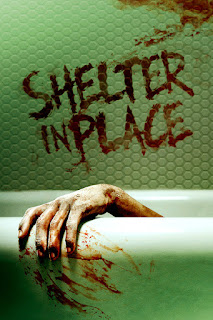 When a global pandemic limits the possibility of travel, a honeymooning couple gets stranded at the Hollywood Roosevelt Hotel where a skeleton staff of two employees tend to them. When tensions escalate amidst a forced lockdown, it becomes apparent there is more to fear at the storied hotel than just cabin fever.

Directed and written by: Chris Beyrooty and Connor Martin

“Shelter in Place,” a phrase that has become all too common these days. Now there are some places that one would definitely not want to shelter in place, and some that might not seem so bad. One of those places might be the Hollywood Roosevelt Hotel, the ever so famous hotel in Los Angeles. That’s where newlyweds Sarah (Tatjana Marjanovic) and John (Brendan Hines) have found themselves during the latest shelter in place.

Not bad considering they have the place to themselves, and a two person crew made of Adela (Ola Kaminska) and Ty (Kevin Daniels) to serve them. They get room service, their room cleaned, and can do whatever they want in the hotel. She takes the time to create social media posts with the hotel backgrounds, and he tries out some of the hotel’s amenities. Soon they start spending too much time together, and tension rises all while something strange seems to be happening around them.

Being in the big hotel with almost no one in it immediately screams “The Shining.” Like that classic, this one is going to start slowly focusing on the couple while displaying what the hotel has to offer. The couple seem fine at the opening, as they take in what the hotel has to offer. There’s swimming, and an unique bowling game before the arguments set in. While they want the audience to focus on their relationship, the real interesting stuff is happening with the two person staff.

There’s certainly a slow pace through much of the relationship stuff, but they’ll keep the audience curious with flashes of things in the background. Is it a haunting, or is someone suffering from cabin fever? It will be hard to tell, but surprisingly it’s going to get a lot bloodier than the audience might have thought. The strange stuff is going to finally come to the forefront, and give the audience an exciting ending.

“Shelter in Place” is another horror movie capitalizing on our current pandemic. The small cast, and their isolation will make things feel a little familiar. Some of us can relate to the cabin fever, and growing on each others nerves like this couple. While it might seem like it takes a little long to get there, horror fans should get a very pleasing ending. One where the cast gets to finally shine, and some blood is spilled. One that might make you think twice before staying at the Hollywood Roosevelt, or maybe any hotel at low capacity. With that, I give it 3 pools of blood!

SHELTER IN PLACE will be available on VOD and Digital September 14, 2021.