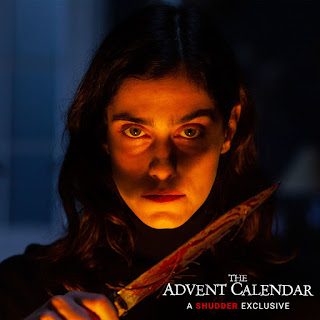 Eva, an ex-dancer, is now living in a wheelchair, unable to walk. When her friend Sophie gives her an old wooden antique advent calendar before Christmas, she realizes each window contains a surprise that triggers repercussions in real life: some of them good, but most of them bad - Now Eva will have to choose between getting rid of calendar or walking again - even if it causes death around her.

Directed and written by: Patrick Ridremont

Don't take candy from strangers, or “The Advent Calendar!” Eva (Eugenie Derouand) is lucky to be alive, but unfortunately now confined to a wheelchair after an accident. She’s making the most of it, but still struggling with finding love and issues with her parents. As December begins, her friend Sophie (Honorine Magnier) visits her with a gift. Yes, she gives her the advent calendar.

They start playing with it only to realize it comes with some rules. The first one is that if you eat one piece of candy then you must eat them all or the creature will kill you. It will also kill you if you break any of the other rules as well. Basically, Eva now has to eat a candy a day and a good thing will happen to her. That’s nice except that a bad thing will also happen, and it eventually amounts to a lot of deaths piling up. 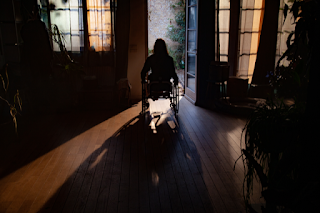 Horror fans have to love when a character receives something with rules attached. They know rules will be broken, and bad things will happen. That’s right, some deaths are headed the audiences way in this one. Some are left somewhat to the imagination, but there will be some well worth watching. Mixed in is plenty of tension in many dark scenes, and while not a movie focused on jump scares it may still catch the audience. However, the scariest thing about the film might be the creature, which may leave the audience wanting more of it.

All of that is the fun part, but what’s interesting is Eva and the choices she has to make. It’s easy to feel for Eva because she’s in a wheelchair, but her personality may make the audience question that early on. However, once good things start happening to her, and they see her just wanting love they’ll definitely be all in on her. And her choices, well early on it’s simple because people who are easy to hate are the ones suffering with Eva’s gains. It becomes harder when she must decide to hurt those closest to her all for the chance to walk again. The choice in how this one ends might be the hardest of all, and might not please everyone. 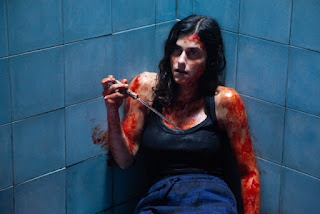 “The Advent Calendar” is going to seem plenty familiar to horror fans. A present with rules is given to someone who might not be ready for the responsibility it holds. Someone who might be easy to feel for, but will still give the audience reasons to question her at times. Things will be too good to be true to start, but much death is to come. With the familiar, the film still manages to carve out its own path starting with the intriguing looking calendar, and the rules it comes with. It moves at just the right pace as it places Eva in harder and harder situations to deal with. And the dark creature controlling the calendar, well that’s definitely something unfamiliar, but would be welcomed for a return appearance anytime! With that, I give it 3.5 pools of blood, and won't be taking any candy from a calendar anytime soon!

More about this film at: http://promotehorror.com/2021/11/04/shudder-announces-release-date-and-drops-trailer-for-holiday-horror-the-advent-calendar/