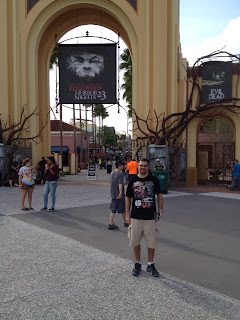 The video below contains most of the pictures I took at Halloween Horror Nights 23 (HHN) not including the tour pictures. Most of the pics are from the scare zones. All of the scare zones this year featured scenes from The Walking Dead, and were obviously filled with zombies. Under the video I highlighted a few things you will see in the video (in order) in case you are wondering what you are looking at.


-Posters of some of the houses hung at the entrance to HHN
-Scareactors walking away from The Walking Dead House. Most of them stayed in character outside of the house.
-A deer that you will later see a zombie chewing on
-Michonne’s pets (but you knew that)
-Bicycle girl crawling around
-The barn
-Daryl’s crossbow on a truck
-The zombies are looking in the water. They had a fireball go off every 5-10 minutes and all the zombies would walk over, and investigate the explosion
-Remember the truck that drives into the prison and lets out all of the zombies. Well they play out that scene a few times a night. They let zombies out of the truck and onto the streets. You see the guys that were in the truck.
-The posters again but this time at night

I hope you enjoyed the video. If you have any questions about a certain pic, please let me know. I have a few more videos coming soon of the zombie eating the deer, bicycle girl, and some scare zones.