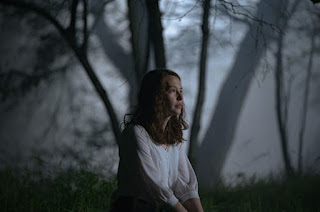 Filmed in Welsh, the picture follows a young woman serving privileged guests at a dinner party in a remote house in rural Wales. The assembled guests do not realize they are about to eat their last supper.

A Beyond Fest Film Festival Review

Everything here is going to lead to “The Feast,” but who will be left feasting? Times have changed and that’s shown on what was Glenda’s (Nia Roberts) family farm. Now her husband Gwyn (Julian Lewis Jones) and her have made a lot of changes to it like making a modern house, and letting energy companies basically destroy the land. They live there with their two sons, one of which is a drug addict, and the other obsessed with being a triathlete. Certainly a family that has been taken in by modern riches, and trying to put the past behind them in more ways than one.

Part of their new way of life is Glenda hosting dinners for people, and tonight she’s having over a neighbor to pretty much talk about the destruction of more land. She usually has help preparing for the dinner, and tonight’s help is going to come from Cadi (Annes Elwy). She’s extremely quiet has she gets herself comfortable with the surroundings, and of course taking orders from Glenda. Glenda isn’t rude, but definitely knows how she wants things for the feast. A feast that they put a lot of work into, and it’s most certainly not going to go as planned.

The first thing to know about this film is that it’s a slow burner. The audience is going to get introduced to the family to start, and gradually learn a little more about them as it goes. Between the father and sons, the audience will wonder what their deal is. The sons are strange, and the father is going to do something that isn’t going to win many people over. Even though she does a lot of talking Glenda might seem like the most normal one. And then there’s Cadi, whose silence is going to leave an uneasy feeling through much of her time there.

She seems to get along with Glenda even without saying much, and that bond grows quickly when she does show the ability to sing a song Glenda is familiar with. She has some unusual run-ins with the rest of the family, and again shows at times to be more than just a shy young girl. Of course any horror fan knows as soon as she enters the house things aren’t going to go as planned. Cadi is just too odd to not be up to something. And that something, well lets just say there will be blood, there will be a gruesome moment or two, and the feast may come out well done! 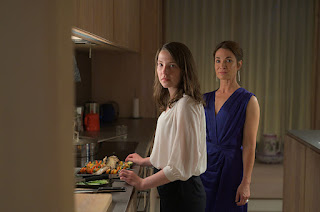 Yes, it’s a very pleasing ending for horror fans. Slow burn might not be for everyone, but with an ending like this it certainly makes up for it. Credit the film for keeping that pace, and unraveling just enough of the mystery along the way as far as the family is concerned. As for Cadi, the audience might never know who she truly is, but that’s alright. The audience will probably see things her way in the end, and horror fans will thank her for a job well done. Feast your eyes on “The Feast,” as I give it a delicious 3 pools of blood!