THE SECRET OF SINCHANEE REVIEW 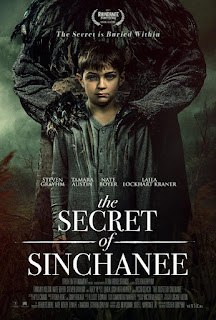 An industrial tow truck driver suffering from insomnia returns to his childhood home after the untimely death of his father, to discover that a paranormal presence has been living in the house and haunting the sacred land it was built on.

Directed and written by: Steven Grayhm

“The Secret of Sinchanee” is another secret that should have been kept hidden. Speaking of secrets, Will (Steven Grayhm) seems to have some of them, or he’s just an odd person. That can be understandable after surviving a double homicide when he was younger. While he tries to put that behind him, it proves difficult when he’s forced to return home after his father’s death.

His return home is also at a bad time because there has been a murder of a mother and daughter in the area. Detectives Carrie Donovan (Tamara Austin) and Drew Carter (Nate Boyer) get called in for the case. It’s a family reunion of sorts because they share a daughter, and a past relationship that didn’t end well. They're able to put feelings aside just long enough to follow a trail that seems to lead to Will. So is Will just a strange but innocent person, or has his past turned him into a killer? 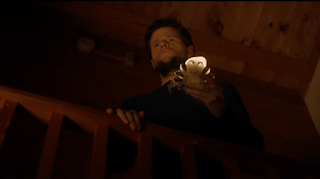 One of the important things this film appears to do is use Will’s character to show the lasting effect of childhood trauma. It’s obvious he suffered from a terrible event, and coming back home doesn’t help. Early on, the film will use his mental health issues to create an uneasy feeling around him, and then a few decent scares. It’s a matter of determining if it’s truly his mental state of mind that’s causing weird things to happen, or is there a supernatural force at play here.

The other half of the film and a big part of it is the investigation by the detectives. Obviously their past relationship will continue to be an issue between them. Their daughter will play a part, as she will find herself in trouble. It ultimately helps the detectives come together, and figure this out before it’s too late. Fortunately for them, they get help from someone a little more familiar with what’s truly happening here. Something that the audience might have wanted more of.

“The Secret of Sinchanee” is going to give audiences a little mix of horror and thriller. With murders out there, a case is formed and two detectives will be searching for the killer. The audience will have to watch the case unfold, and take different directions. One of those directions is towards Will, who brings the horror into the film. His continuing trauma gives the film a chance to try and scare the audience, and set a weird vibe when Will is around. All these pieces create a solid movie, which I give 3 pools of blood.