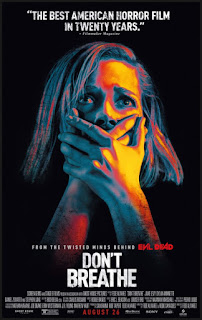 A group of friends break into the house of a wealthy blind man, thinking they’ll get away with the perfect heist. They’re wrong.

On the surface, the premiss for “Don’t Breathe” seems pretty simple. As simple as a three friends, Rocky (Jane Levy), Alex (Dylan Minnette), and Money (Daniel Zovatto), trying to rob a blind man (Stephen Lang) in his house. There’s some concern that this is going to turn out to be just another home invasion movie. However, there’s one hell of a twist that puts this movie on the map!
This well constructed story begins with the friends robbing a house, and displaying that they have done this more than once. Soon after that, the audience gets a glimpse of each character away from the group. It’s here that they’re trying to get the audience to have some sympathy for them, even with knowing what they’re about to do. Rocky, in particular, has a young daughter, and wants some money to move somewhere more beneficial for them.
It’s interesting how they also build some sympathy for the blind man. It turns out he lost his vision in the war, and more recently lost his daughter in a car accident. The friends have come to steal the money he got in a settlement over his daughter’s death. As the friends break in the house, it’s time to decide who to root for. The friends, who are just looking for a better life, or the blind man, who’s just minding his business in his own home?
When the friends break in, the camera takes a journey around the house giving the audience a glimpse of what’s to come. It’s just the beginning of many great camera angles used throughout the movie. When the blind man figures out he’s not alone, it doesn’t take long for him to take out one of the thieves. The remaining two find themselves trapped in the house, as the tension quickly builds. The tension builds because of the dark and silent atmosphere of the house, and knowing the blind man isn’t messing around. If there are any doubts about where the sympathy falls, that’s erased once the twist is revealed. The twist for the characters only gets worse as the movie goes on!
After watching “Don’t Breathe,” it’s clear this isn’t a standard home invasion horror movie. The story is set up well trying to get the audience to be sympathetic to both the friends and the blind man. Great camera work helps build the tension in this dark setting. Stephen Lang does a fantastic job acting as if he's blind, and really brings out the brutality of his character. Most of all, the crazy twist truly separates this movie from the rest. Director Fede Alvarez mentions this movie is like a different version of “Home Alone.” Well I like this version enough to give it 3.5 pools of blood. 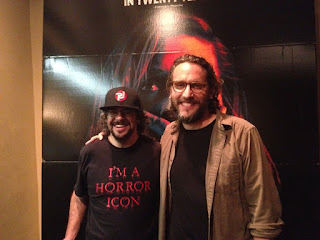