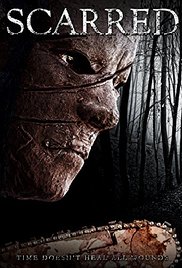 Four models go on a photo shoot at an abandoned house previously belonging to the infamous Kandie family. Little do they know that Jonah Kandie still lurks there, seeking revenge on anyone that comes near after being scarred beyond recognition by his father as a young boy. One by one, the models soon become the victims of the vicious killer's merciless hatred for all things beautiful.

Directed and written by: Eddie Lengyel

Sometimes it pays to be ugly! Well at least it does in “Scarred.” A group of models heads out into the middle of nowhere for a photo shoot. While they show off their good looks for the camera, they have no idea they’ve stumbled into the hunting ground of Jonah Kandie (Don Kilrain). He definitely doesn’t like the looks of the models as much as the camera does.
However, for the audience the models might be nice to look at, but aren’t that interesting. The interesting part of this film revolves around Jonah’s backstory. As the film progresses, the audience learns more and more about him. It turns out he’s the victim of his father’s abuse that has left him scarred in more ways than one. Now he’s taking out his aggression on the beautiful people of the world.
And boy does he have some aggression. He just doesn’t kill the models, but he mutilates and tortures them. The best one might be when he heats a stick, and decides a model doesn’t need one of her senses anymore. He also has a little Leatherface in him, as he makes a bloody mess with a chainsaw.
Instead of dragging college kids out into the middle of nowhere, “Scarred” leads some models to their slaughter. The models will keep your attention until Jonah takes over. The audience should enjoy the mystery of his background, and how he makes quick work of the models. While the ending makes sense given his motives, it does end a little too suddenly. Regardless, the blood and beauties certainly entertain in Kandieland, so I give it 2.5 pools of blood.

*You can find the film at www.scarredthemovie.com or Amazon.