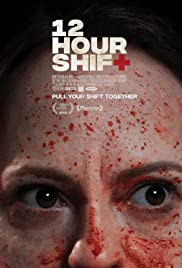 Bodies start to pile up when a drug-user nurse and her cousin try to find a replacement kidney for an organ trafficker.

Directed and written by: Brea Grant

Nurses have it rough, and this “12 Hour Shift” is about to become one of the toughest, and most memorable ones for all the wrong reasons. Mandy (Angela Bettis) gets settled in for another day at work by doing some drugs to start. Then she has rounds to do, and maybe some drugs to steal. There are new patients on the floor including her unconscious half-brother, injured prisoner Jefferson (David Arquette), and an elderly lady with possible dementia. She also has one more important thing to do…hand over a kidney to her cousin Regina (Chloe Farnworth).
Of course this wouldn’t be any fun unless something went wrong, and it goes oh so wrong. In their conversation around the soda machine, Regina manages to leave the kidney behind. When she doesn’t have it for her crime boss Nicholas (Mick Foley) he’s not happy. He orders her to go back for it, and sends one of his goons to deal with her if she can’t get the organ back in time. Mandy’s 12 hour shift is about to become a nightmare when she finds Regina desperately trying to find a kidney in the hospital.

The first thing this movie does well is set everything up, and ease right into the eventual chaos. The patients are introduced early on, and each play a role in the events to come later. The older lady helps provide some funny moments while Jefferson seems to be there to strike fear in people, but is also comic relief. Mandy’s part in the transportation of organs is slowly revealed, as she has help from a fellow who’s trying to keep her hands clean. Regina is newer to this operation, and definitely the weak link.
While the story follows Mandy, it’s Regina that steals the show. Her carefree attitude and lack of smarts in certain areas are just the start. She doesn’t seem like she has it in her when the audience first meets her, but later on proves she will do almost anything to survive. She has a complete disregard for the hospital and patients, as she continues to try to fix things, but just makes things worse. She thinks she has done the right thing until she has to be told just how wrong she is. Mandy and her have opposite personalities that make them fun to watch.

Speaking of fun, the limits are definitely pushed in the final act of the film. Regina has caused so much damage, and the hired goon finally catches up to her making matters worse. It’s so bad cops are on the scene, but lets just say they’re more like the Dewey type of cops (no wonder why Jefferson hates them). Mandy is put in some tough situations, but ultimately does the right thing. Adding to the mix is some great music, including a surprise short musical number.
When it comes times for you to watch “12 Hour Shift” please make sure you’re paying attention. It starts with brief introductions to the nurses, and new patients, which will be part of the madness to come. Keep an eye out for things in the background, and laying around because they leave everything for the audience to see even if most characters miss it. Mandy might not seem like the most likable character at first, but she’ll probably win the audience over in the end. In the meantime, enjoy the disaster that’s created by Regina. Angela and Chloe are fabulous in their roles, and definitely great on screen together. This truly turns out to be a great 12 hour shift leaving the audience to wonder what’s to come in her next shift. With that said, I give it 4 pools of blood, and hope to never to end up in that hospital.