DEATH OF ME REVIEW 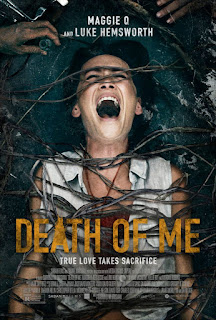 A vacationing couple must discover the mystery behind a strange video that shows one of them killing the other.

“Death of Me” picks up with Christine (Maggie Q) and Neil (Luke Hemsworth) waking up from a long night of apparent drinking. They both struggle to remember what happened last night, and their vacation home is a mess. They gather themselves and make their way out to the ferry to get off the island because a typhoon is headed that way. Unfortunately they can’t get on the boat because they can’t find their passports, so they head back to the house to look for them.
They continue to try and remember what happened the night before, and get help from a video. It appears they did go out to eat and drink. A waitress gives them a special drink, and almost celebrates them being there. They fast forward a little to find the two of them having sex outside. That seems to surprise them, but that’s nothing compared to their reaction when they watch Neil kill and bury her. No the movie isn’t over…this story is just beginning. 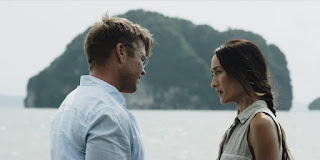 Mystery, religion, and cults come to mind as this story progresses. They carefully ease into giving the audience clues at what’s really going on here, and it won’t be easy to figure out for the audience and the couple. The biggest reason for that is that they’re on an island, and at the mercy of people around them. Everyone seems to be doing their own thing, but how many of them truly know what’s going on? Hell, are they really there to begin with?
Christine has some hallucinations, which create more questions as to what’s happening. Besides the questions, they also create some of the freaky moments in the film. Some include kids and other people in the village, and some are of things that may or may not be happening to her. And one of the best scenes features a hallucination of Neil when they make another attempt to get off the island. Of course things pick up in the final act, and they have a few more creepy things in store. 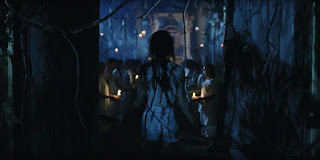 While it’s a well put together mystery, Maggie Q definitely puts on a great performance. Her character is eventually at the center of what’s going on, so she’s involved in almost everything that’s happening. She makes her characters’ reactions to the crazy situation seem so natural, and is particularly terrific when the action picks up in the final scene. Maggie is supported by strong performances from Luke, who spends a lot of time playing opposite her, and Alex Essoe, who owns the house their characters are staying in.
“Death of Me” opens with some confusion for Christine and Neil, and then slaps them in the face with the possibility that he killed her. That couldn’t have happened because she appears very much alive! From here on out it’s a mystery for the couple to solve, and the audience to enjoy. The island quickly becomes a big element in the film starting simply with some beautiful shoots, and then flipping it with some darker and eerie ones. It also allows for them to take advantage of the differences in culture and languages to further the confusion. Of course the secret here has something to do with the island, and/or it’s people. Christine’s hallucinations are used to freak out the audience, and it all comes to an exciting end. Maggie Q plays her role like it was meant for her, and she helped out by great performances around her. With that, I give it 4 pools of blood, and won’t be visiting any islands anytime soon!

Death of Me will be available In Theaters, On Demand, and Digital October 2nd!

More info about this film at: http://promotehorror.com/2020/08/20/official-trailer-and-poster-for-death-of-me-in-theaters-on-demand-digital-october-2nd/
Posted by HorrO at 1:54 PM