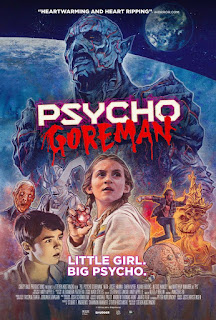 After unearthing a gem that controls an evil monster looking to destroy the Universe, a young girl and her brother use it to make him do their bidding.

Directed and written by: Steven Kostanski

“Psycho Goreman” doesn’t sound like someone you want to hangout with unless your name is Mimi! Before finding himself on Earth, Psycho Goreman, or PG (Matthew Ninaber) was nothing but a prisoner to his planet. Then one day he luckily found an amulet that gave him power to kill everyone who was holding him down, and many many more. No, his story isn’t about becoming a hero and freeing everyone, but more about becoming a killing machine.

The leaders of several planets led by Pandora (Kristen MacCulloch) came together to banish PG, and save themselves for the time being. Sister and brother, Mimi (Nita-Josee Hanna) and Luke (Owen Myre), change those plans when they dig a hole in their backyard. Mimi thinks she just found a piece of jewelry, but soon enough finds out they dug up something else. When they find PG it seems they’ve met their doom, and PG couldn’t be happier to get rid of these two kids. Unfortunately for PG, Mimi has the amulet, and new found control of her very own killer alien! 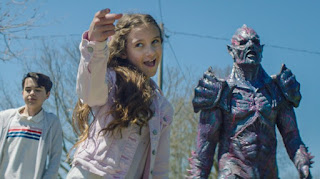 There is so much to love about this movie that it should be hard to find a place to begin. However, the fabulous performance by Nita is the perfect place to start with. Mimi is strong willed, and so bossy that even her parents are scared to tell her ‘no.’ On the other hand, she’s just another kid at heart wanting to play games, and be adventurous. Nita plays both sides of this personality to perfection as her character turns the most lethal killer in the galaxy into another one of her minions.

In his world, PG is very much the same as Mimi, with minions on his side and everyone else running in fear. Too bad those who find themselves on the wrong side of PG usually end up dead. He doesn’t take long to show what his powers can do to easily dispose of humans, or turn them into an ooey gooey zombies. His mind is only on destroying everyone in his path, and yet he’s found himself at the mercy of a little girl.

These two personalities come together to create some hilarious moments. Just imagine Mimi dressing up PG like she would a doll, taking him for a stroll through town, and teaching him her made up ridiculous game. Then him having moments to display his power blowing up random people, and turning people into mindless zombies. This brings in the SFX, which are practical and all done to please the audience. Just wait until the audience gets to see how PG gives his ultimate respect to his fallen rivals!

And hidden in all the fun, and SFX is a story about family. A family where Mimi rules over all, especially her brother, and their mom who struggles to get her husband to do anything. Everyone is forced to take sides as the inevitable battle between Pandora and PG comes to a head. It’s a good battle, but also one the audience will expect to see with how the movie plays out. While that battle takes place the family uses the moment to work out some of their own family issues.

“Psycho Goreman” starts off like a Star Wars movie, but quickly becomes a very 80’s like movie filled with its share of horror, SFX, and comedy. It’s a film that isn’t afraid to make fun of itself along the way, and push the bounds of ridiculousness. It all starts with two strong personalities that would never get along if it weren’t for an amulet giving control of one over the other. Nita nails her character, and puts on a brilliant performance. It wouldn’t be surprising to see her name come up in some future movies real soon. The audience will see a lot of work went into the practical SFX, and will love every time PG turns on someone. And just like many great 80’s films there’s a story about family to be found in the middle of the madness. With that said, I give it 5 pools of blood, and hope that there is a sequel one day if PG hasn’t destroyed the world yet!

More about this film at the link below: