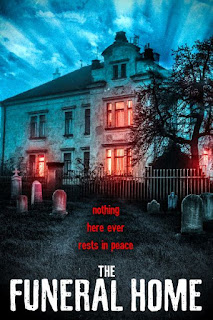 Bernardo is an undertaker. He runs his mortuary business in the same house where he resides. In the front he has his clients. And in the back, his dysfunctional family lives among coffins, wreaths and mischievous supernatural entities that visit on a daily basis. They attribute the paranormal manifestations to the dead bodies from their mortuary work. Find the real source of all this madness will be their quest, but they might find a terrifying truth.

“The Funeral Home” is supposed to be for the dead, and the living are about to remember why. Bernardo (Luis Machin) has taken over the family funeral home from his father. Living with him is his wife Estela (Celeste Gerez), and her daughter Irina (Camila Vaccarini). While he works in one area of the house, the three of them live in another. Then there is the area for someone, or something else. They’re apparently sharing the home with some ghosts, and they actually signed up for it!

That’s right, this family knows good and well that they have ghosts living in part of their home. This is quite dysfunctional, but then again so is this family. Each has an issue that effects how they feel about the others. Bernardo has guilt over how he left things with his father, and has been trying to talk with his ex-wife who is among the dead. Irina is still mourning the death of her father, and doesn’t accept Bernardo as a new dad. Estela is in the middle of their tension, and takes drugs to get through the haunting nights. If they think their problems with each other are bad, they better prepare for what’s coming.

It’s an unusual set up that all starts with the funeral home. The audience will expect it to be creepy, and it definitely is. There’s a couple of times when the camera is just winding its way through the house taking in all of the bumps in the night. It’s dark with a smokey look, and things that appear to move by themselves. Even in the day time it looks run down, and hard to believe they’re still there.

The house is one thing, but then there are the ghosts. The ghosts aren’t suppose to haunt the family, and that seems to be the case to start. Most are friendly and unseen, but eventually things seem to change. Now something has broken the truce with the family, and their lives are in danger. There are some good hauntings in an outdoor restroom of all places, but things don’t get really crazy until the final act.

A final act that has come because of the family’s disfunction. It’s what the audience sees a lot of leading up to this point, and finally a family secret comes out that shows why this evil has been unleashed. The final act starts off with some intense moments, and a good scare or two. Then it comes to a very odd ending. A fitting ending in some ways for one character, but still an unusual ending for the film.

It’s kind of surprising that audiences don’t see more films set around a funeral home. The home here is what audiences would expect to see. They build a good story that takes a different angle with having the family accept the fact that ghosts live in part of the house. Because of that, there aren’t as many hauntings as usual, but the uneasy feeling is still there. The real excitement comes in the final act, which ends with one character’s story coming full circle in an odd way. With that, I give “The Funeral Home” 3 pools of blood!