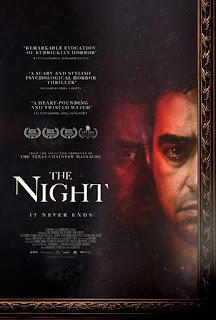 An Iranian couple living in the US become trapped inside a hotel when insidious events force them to face the secrets that have come between them, in a night that never ends.

“The Night” proves to be a bad time to check into a hotel. It’s going to be an extremely long night for Babak (Shahab Hosseini) and Neda (Niousha Noor), but before things go wrong they have a little fun. They’re at a friends house drinking and playing some games. It’s getting late and probably past their baby girl’s bedtime, so they decide to hit the road. Their friends offer them a room for the night, but Babak insists he can make it home with no problems.

He seems to get a little lost on the way home before getting into a small accident. It forces them to take refuge for the rest of the night in a nearby hotel. The strange man at the front hints that the hotel is almost full, but has a suite for them. This is odd later on because the hotel appears rather empty once things go wrong. And yea, things start going really wrong once the couple tries to get a few hours of sleep.

Starting from the moment they walk into the hotel something seems off. Is it the hotel that’s haunting them, or something more personal? Babak wakes and appears to be haunted by a woman while Neda wakes to a haunting of her own. Neda is haunted by hearing and seeing a young boy who apparently is looking for his mommy. Neither the woman or the boy produce any great jump scares, but they do keep things uneasy for the couple and the audience. One of best scenes is easily when a cop comes to check on them.

So while the audience might not jump out of their seats, they might be on the edge of them as the couple struggles to figure out what’s going on. The hotel provides a great setting to entrap the couple. It’s dark, and much more abandoned then they might have thought. Every time they hear something they think it’s another guests, but it’s more likely whatever is haunting them. Things also play out making it hard for them to just get up, and walk out like they want to do. And don’t forget that while all the madness is happening there is still a baby girl to look out for.

Babak and Neda wish the night would come and go, but unfortunately for them this night never seems to end. The couple will check into a hotel, but find it hard to check out like normal people. The hotel provides a great place for all of the hauntings without having to do anything out of the ordinary. While the audience might not be jumping out of their seats, they will find themselves invested in what’s happening to the couple. That’s because Shahab and Niousha, who might not be familiar names and faces for some, do a pretty good job bringing out true fear in their characters. The secret behind the hauntings might be the secret to the story’s success. With that, I give “The Night” 3 pools of blood.

More info about this film at: http://promotehorror.com/2021/01/07/new-trailer-poster-iranian-psychological-thriller-the-night-starring-shahab-hosseini-a-separation-jan-29/