LET US IN REVIEW 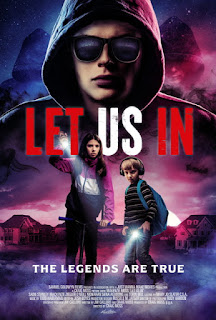 A spirited twelve year old girl and her best friend look to uncover the sudden disappearances of several missing teens in their small town. Realizing there might be something deeper happening, Emily and Christopher might be up against forces they can’t even imagine. Based on the urban legend “The Black Eyed Kids.”

Once they say, “Let Us In,” you’re in big trouble. Emily (Makenzie Moss) and Christopher (O’Neill Monahan) are two best friends working on a special project. They appear to be trying to create a way to communicate with aliens, but it has been a struggle. Christopher is definitely dedicated to the project, but Emily has some more important struggles going on in her life. She’s struggling over a tragic accident with a friend, and now having issues with some of the other girls at school.

However, her biggest issue may be the “Black Eyed Kids.” She’s left alone one night, and has a surprise visit from them. Most people aren’t as lucky as she is, as she manages to avoid getting taken by them. Of course this makes her interested in them, and even more so when people close to her go missing. She continues to work with Christopher both on their science project, and on who the “Black Eyed Kids” really are. 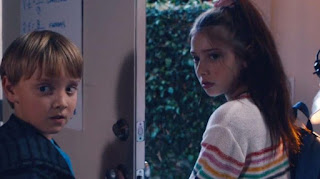 It won’t take long before the audience will appreciate this young cast. At first glance, Makenzie and O’Neill might not seem like a natural pairing, but soon enough the audience will see how well they work together. O’Neill nails the comic relief, and Makenzie does well to balance being a kid, and handling the more serious situations. They get support from other young actresses like Siena Agudong, and Sadie Stanley. Of course it’s nice to have a familiar face for horror fans, and they’ll get that in Tobin Bell.

And while the audience roots for the young duo, they’ll get the creeps from the “Black Eyed Kids.” There isn’t anything over the top about them like scary faces, or special weapons. They do a lot of their intimidating with their black eyes, hoodies, and constantly asking their victims if they will “let us in.” Don’t answer the question correctly, and they’ll bring the pain. They do have some secrets that Emily and Christopher will have to discover if they hope to survive.

As director Craig Moss noted in our discussion of the film, “Let Us In” is a great movie to be used as an introduction to horror for a young audience. The youths in the film go through some relatable experiences, and relationships before getting to any of the horror. As for that horror, there are jump scares and creepy moments courtesy of the “Black Eyed Kids.” They’ll make the audience cringe a time or two, but it’s not a gore fest. The young audience should also enjoy the mystery that’s uncovered along the way. With that, I give it 3 pools of blood.

On Demand and Digital – July 2