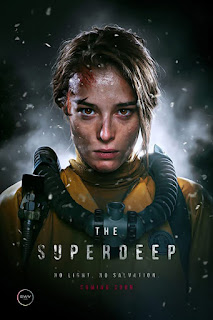 A small research team went down below the surface to find out what secret the world’s deepest borehole was hiding. What they have found turned out to be the greatest threat in history. And the future of humanity is in their hands.

Dig “Superdeep” into the earth and you’ll find things that are better off left buried. A secret medical facility has been created in one of the deepest places ever dug. While down there something has gone wrong that endangers the entire operation. Unsure of what's happened, the very intelligent Anya (Milena Radulovic) is called, and promised many great things if she can go down there and figure out what’s going on. Too bad no one tells her just how bad it truly is down there.

Along with a group of soldiers, their helicopter lands just in time to see someone apparently trying to escape, or stop them from getting out. Either way, he’s dealt with, and their real guide is ready to take them inside. There seems to be one way in and out on an elevator that works in a particular way. It basically means once they go down there, they’ll be there for awhile. That’s fine for Anya at the start because she’s ready to investigate, but soon enough she’ll be dying for that elevator ride back to the surface.

While watching the film horror fans will no doubt have memories of “The Thing.” Eventually the group will have to deal with some interesting looking creatures. At times they will gross out the audience, and others they will leave them in awe. The creatures get nastier as it goes on, and the final one is out of control. The special effects with the creatures is awesome from beginning to end. Anya will learn she was promised all those things because no one really expected her to make it out in one piece.

While fans will be treated to a visual feast, their ears might not be as happy. This is a Russian film that’s dubbed, and it gets kind of tiresome at almost two hours long. There’s probably some good performances lost in there somewhere, but it’s hard to tell with the dubbing. Regardless, it’s clear to see and hear that Milena gives a great performance because she plays a smart and strong female character. Yes, she’s taken back by the madness down there, but she’s going to fight to the end.

Russia has been in the news a lot lately, and not for many good reasons. Too bad they don’t get more coverage of their horror films because there have been some good ones recently. The special effects here are top notched, and deserve all the credit they can get. The story is solid leading to plenty of suspense and tension as the madness builds down there. Audiences might not be sure about Anya at first, but she’ll eventually win them over. Look past the dubbing because if you enjoy horror like “The Thing” there’s a good chance you’ll like this as well. With that said, giving it anything less than 4 pools of blood would be disrespectful to the special effects alone.