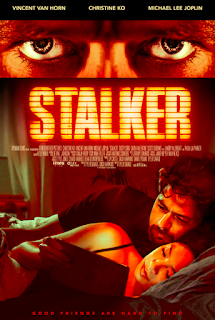 A young man’s budding romance is threatened when he befriends an unstable ride-share driver.

“Stalker” brings a whole new meaning to being stalked in this new era of technology. Andy (Vincent Van Horn) has left Texas for California, and looking to get settled in. His move is made easier when he meets Sam (Christine Ko) at a bar, and the two hit it off. They take a ride-share back to her place, and hang out a little longer. The next day he gets a call, and takes part in a quick interview for a tutoring job. Things seem to be looking up for him as he gets the job.

Then he takes his dog for a walk to get some coffee, and runs into the ride-share driver, Roger (Michael Lee Joplin) from the previous night. The two talk, and decide to get drinks soon. It looks like Andy is off to a good start in his new home by finding a girlfriend, and new friend. However, he doesn’t realize that Roger is watching him when Andy ditches him to hang out with Sam. Roger isn't happy about this, and now is about to become a huge thorn is Andy’s side.

Roger is about to put on a master class on how to stalk, and mess with someone’s life. He does some of the stuff one might expect like breaking into Andy’s apartment, and looking through his social media to learn about him. When the movie opens the audience sees Andy using his phone a lot, and then the audience will see why that’s important. Roger uses technology to work against Andy. He basically gains access to everything Andy has in his phone and computer like his photos, videos, bank account and more. It’s scary enough to see how easy someone can do that to another.

Besides being tech savvy, Roger is an absolutely creepy individual, and very easy to hate. He takes way too much joy out of torturing Andy. Andy might not be the most likable guy, but the audience will probably feel sorry that he’s on the opposite end of Roger’s madness. As this plays out, the audience will await a showdown between Andy, and Roger. This has been a twisted and cruel story throughout, so of course the movie is going to end with one more heartless twist.

Sometimes good horror is made by presenting situations that are as real as possible. Whether by ride-share driver, or another random person, anyone could find themselves being stalked. One of the scariest things about “Stalker” is how easy it is for Roger to get into Andy’s personal information, and use it against him. All the audience has to do is put themselves in Andy’s shoes to see how really bad this situation is, and it doesn’t get any better in the end. Michael really does do a good job of making Roger a despicable person. This film is another reminder to not be blind to the people you surround yourself with. With that, I give it 3 pools of blood.