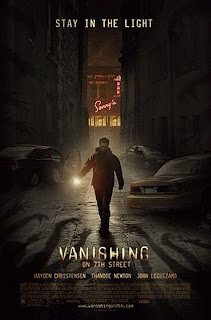 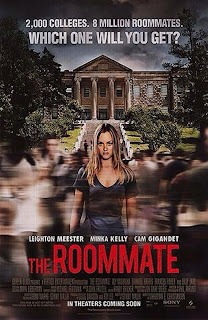 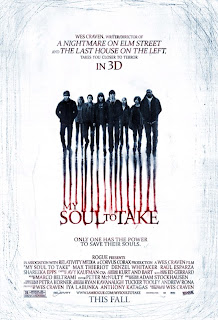 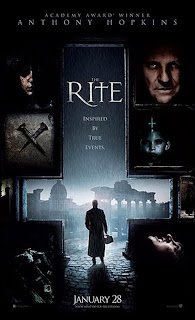 It is interesting to hear some people say they are tired of exorcism movies. Are there that many more exorcism movies that have recently come out that I don’t know about? I guess people feel they are seeing the same thing in exorcism movies. Well, I am not sure what else you can expect with titles such as, The Last Exorcism, The Exorcism of Emily Rose, or The Exorcist. The titles reference an exorcism, so the movie should be about that. Maybe they want more imagination to come from the exorcism itself. So with a movie titled The Rite, did it become just another movie centered on an exorcism, or is there something else to it?
Michael has struggled with the death of his mother for a long time. He is not all that happy working with his father in a funeral home, so he decides to go school to become a priest. Michael continues his life struggles, as he is not sure if he really believes in God or not. Just when he decides to drop out of school, Father Matthew convinces Michael to go to an exorcism school in Italy. This is where Michael meets Father Lucas, and his faith is ultimately tested.
Let me go ahead and start off with something that shouldn’t surprise many people. Anthony Hopkins puts on another great performance this time playing Father Lucas Trevant. Rarely will I go to the theater because of an actor. However, Anthony Hopkins is one of the few actors that can get my butt off the couch, and into the theater. There is nothing in the character of Father Lucas that he doesn’t master particularly in the events that happen towards the end of the movie.
If you are looking for head spinning fun, and a vomit shower, then you might be disappointed. Hell, even Father Lucas tells Michael that he shouldn’t expect to see any of that. It is a nice way to sneak in a reference to The Exorcist. What you mostly get are some minor body contortions, a change in the possessed person’s skin, and a lot of interesting one-liners from the demon. The craziest thing that happens during the exorcisms is when the person coughs up blood leading to them spitting out nails.
What makes this movie kind of different is that it is more about Michael, and his battle to believe than the actual exorcisms. I didn’t have a problem with this because I didn’t expect the movie to rely heavily on them. The Last Exorcism disappointed me because I expected the movie to rely on the exorcisms, and to be scary. Instead, everything that seemed scary in the previews happened in the last 10-15 minutes of the movie, and weren’t really scary to begin with. Even in the first exorcism that Father Lucas performs you get that feeling that he is not taking it all that seriously. The Rite is based off a supposedly true story, which is one of the reasons they don’t go too overboard with the exorcisms, and stick to Michael’s story.
My only real problem with the movie is Michael. I never really feel a connection to the character. Yes, I feel sorry that he loses his mother at an early age, and hasn’t found his way in life, but there is just something missing. Maybe if they had brought up his mother’s death earlier in the movie. It isn’t until the end, where there are flashbacks of a young Michael at his mother’s funeral that I even really feel a need to root for him. Michael just seems lifeless as he tries to figure things out. He cares about people, such as the possessed pregnant girl, but there isn’t an overwhelming outflow of emotion from him. When the demon is trying to convince him to believe in the devil, I just didn’t care enough to want him to resist it. Actually, I kind of wanted him to say yes to the devil in order to spice things up, but it isn’t that type of movie.
Some of the shots in the movie are really nice, while others are sort of creepy. It is easy to get nice shots when you are shooting pictures of Italy. It is such a beautiful place that it is hard to take a bad shot. Besides the shots of the country, there is one scene where Michael seems to be lost in his thoughts, and he hears a weird noise. He looks around to see a mule. This mule is different because his eyes are a glowing red color. I can’t remember too many other times where I saw a creeper looking mule. Also, there is an eerie scene at the very beginning where Michael is preparing a body for a funeral. As you see him stuff the body, and close the dead woman’s mouth, it reminds you of how cold, and final death really is.
I wouldn’t say this is just another movie with an exorcism. If you are tired of exorcism movies, you may like this one because it is a little different. While exorcisms are part of this movie, they don’t try to scare you out of the theater, which some exorcism movies try to do. This movie stays centered around Michael, and his path through life. Unfortunately for me, I couldn’t thoroughly enjoy the movie because I just couldn’t feel enough for Michael until too late in the movie. However, if you end up liking his character, you will probably enjoy the movie even more. At the least, Hopkins gives another great performance that is well worth seeing. Too bad he doesn’t get more screen time. Overall, this is a pretty descent movie, which I give 3 pools of blood.
HorrO
Posted by HorrO at 2:52 PM 4 comments: