MY TRIBUTE TO GREMLINS 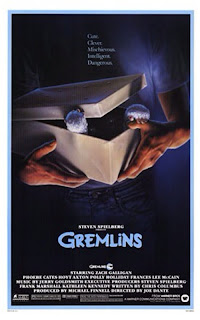 I don’t know why other than it is the holiday season, but I was in the mood to watch Gremlins. This was one of my favorite movies when I was growing up. I don’t know how long it has been since I last saw it. After watching it, I was happy to see that I still enjoyed it after all these years. Instead of reviewing it and boring you with all the reasons I love it, I decided to pay tribute to the movie. So with a few comments and fun facts sprinkled in, here are pictures, and videos of some of the unforgettable moments in Gremlins. 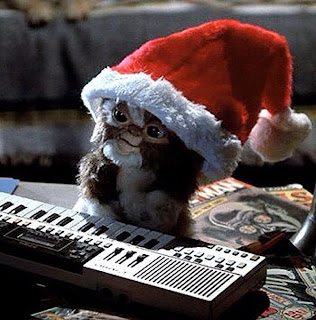 How could you not love this little guy? 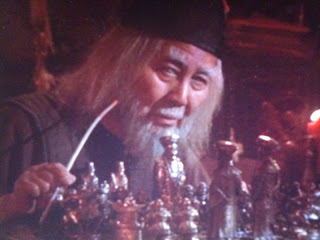 I told you all selling the Mogwai would be a mistake! 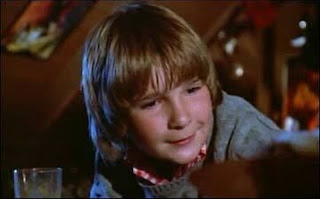 I forgot he was in this movie. 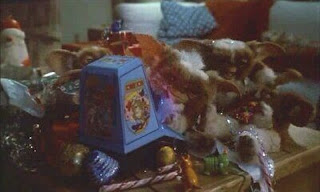 The days before PSP and Nintendo DS!

Fun fact 1: The gremlin was actually coined by the British Royal Air Force in the early 1900s. The word gremlin first appeared in print in a poem published in 1929 in the journal Aeroplane. Gremlin was used during WWII to explain the inexplicable mechanical problems that would happen while an aircraft was in flight. 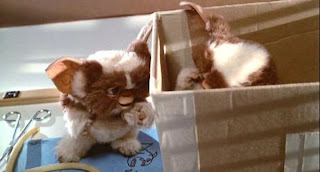 A Gizmo Clone…this can’t be good! 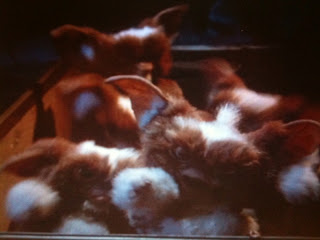 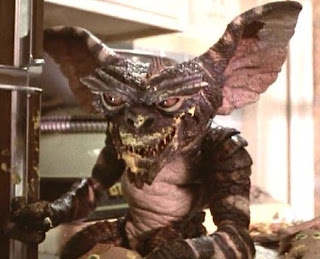 Tell me you are not eating my gingerbread man cookies! 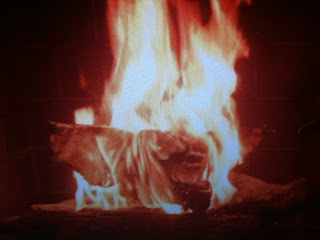 This isn’t a chestnut roasting on an open fire.

Fun fact 2: Mogwai can be translated from Mandarin and Cantonese Chinese as meaning monster or demon. In Gremlins, the mogwai is a cute little animal who likes to sing. 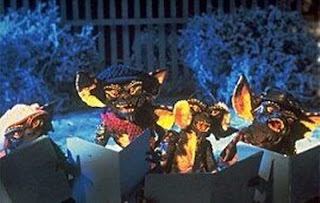 It is awesome how they sing the Gremlins theme song.

How I love the bar scene: 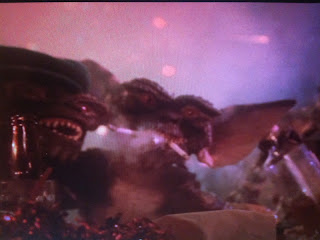 Smoke if you got em!

One of the things about the gremlins that always amuses me is how they laugh after they do something bad. 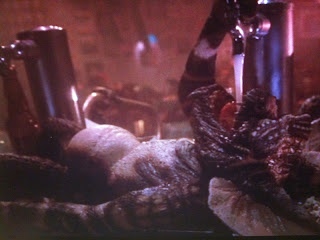 Who needs a bartender?


Fun fact 3: In the original draft of the script, instead of Stripe being a Mogwai who becomes a Gremlin, there was no Stripe the Mogwai and Gizmo was supposed to turn into Stripe the Gremlin. Steven Spielberg overruled this plot element because he felt Gizmo was cute and audiences would want him to be present at all stages of the film. 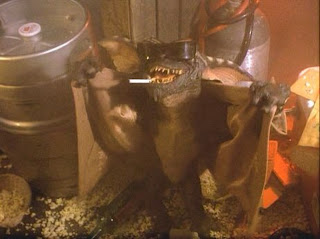 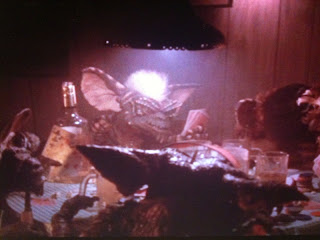 I think it is best if you let Stripe win. 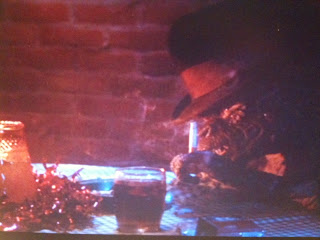 He is a cool cat.


Fun fact 4: Little to no actual dialogue for the Gremlins and Mogwai exists in the script in itself. In addition to several instances of on stage rewrites changing or adding to much of the script, the voiceovers were all mostly ad libs, repeating snippets of just performed dialogue or in reaction to other sound effects or environment. To this end, Howie Mandel recorded Gizmo's lines phonetically for foreign dubs of the movie, where localized dialogue and in jokes helped make the picture successful with audiences worldwide. 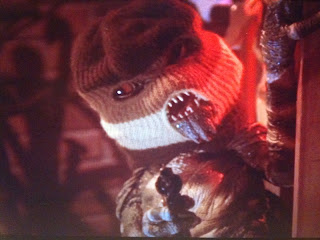 Hey, weren’t you the same Gremlin that held up the bank? 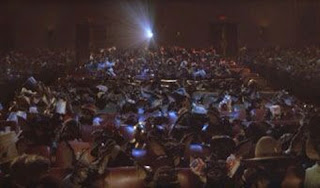 Gremlins like Snow White and the Seven Dwarfs, go figure! 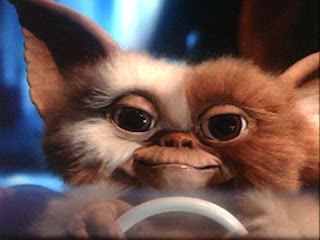 Gizmo to the rescue!

Fun fact 5: The theater that blows up was subsequently involved in another accident when Marty McFly (Michael J. Fox) in Back to the Future (1985), smashes into the front entrance at the end of the film. The theater then burned down with the rest of the buildings in the fire that happened right after the filming of Back to the Future Part II (1989). 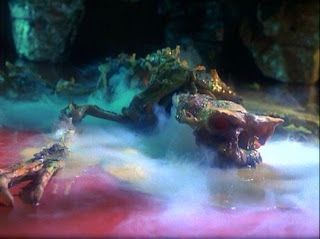 The final narration of the movie by Billy’s father:


“Well, that's the story. So if your air conditioner goes on the fritz or your washing machine blows up or your video recorder conks out; before you call the repairman turn on all the lights, check all the closets and cupboards, look under all the beds, 'cause you never can tell there just might be a gremlin in your house.” 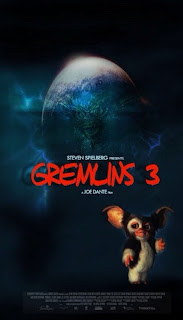 Hopefully we get a fun and well done part 3 one day! 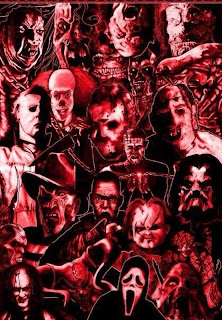 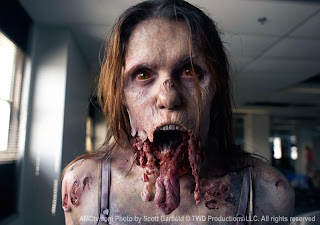 Zombies have finally made their way onto our television sets. The Walking Dead gave horror fans something to be excited about after Halloween. Too bad it couldn’t continue more into December. Oh well, now that season one is over it is time for a quick review in case you missed my weekly random thoughts on the episodes.
I am not too familiar with the comic, so a lot of the show was new to me. Obviously it is about zombies, but I wasn’t sure what to expect. There are two things that stuck out. One is how many really emotional moments the characters go through, and the other is obviously the zombies. One thing that can’t be missed in each episode is the emotional moments. The show really wants the audience to feel sorry for the characters, and they use that sorrow to get the audience to connect with the characters. From the moment Morgan looks through the rifle at his zombie wife deciding whether to kill her or not, to Rick reuniting with his family. From having to watch Amy die, come back a zombie, and then die again, to having to leave Jim on the side of the road. I quickly learned that this show just isn’t about killing zombies, and zombies killing people.
While it may seem easy to connect to some of the aforementioned characters, there is also a chance to connect with even the more disliked characters. There is no disliked character with a bigger role than Shane. While Shane seems like he is trying to do what is best for everyone, he is too high tempered, a liar, and a cheater. However, the audience eventually finds out that Shane honestly tries to save Rick, so he isn’t as big a liar as he seems. He just falls in love with the wrong woman at the wrong time. Then there are the brothers Merle and Daryl. Both need some anger management classes, and distance themselves from the group with their racism. It is quite surprising that the show went as far as it did with some of the racism, but that is what happens when they can put a show on AMC, and not NBC. As foul-mouthed as Merle is, did he really deserve having to cut off his own hand? And Daryl, even though he is quick to want to put everyone out of their misery, the audience can still pull for him to find his brother (and ride off into the sunset). 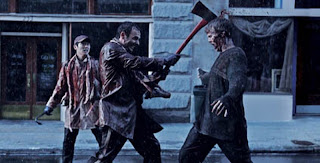 Now to my favorite part of the show: the zombies. In the first episode, there are zombies everywhere. The first zombie that the show displays is a little zombie girl, which is a good choice to kick things off. From there Rick finds zombies roaming the streets, a half bodied zombie crawling in the park, and a massive group of zombies in the city. As the episodes go by, the number of scenes with zombies starts to drop. It seems like the zombies start taking a back seat to the emotional moments. If you read my random thoughts on the episodes, you could probably tell I was somewhat annoyed by this. The emotional stuff is great, especially for TV, but the more zombies the better. Not only that, but it isn’t until the end of episode 4 that a zombie kills a person. Before that, they show zombies eating a horse, deer, and a rat. Disgusting yes, but it is not as fun as watching people and zombies fight it out.
As far as the zombies themselves, they are really well done. The half bodied zombie is a nice touch. Then there is the woman zombie in the building with its mouth all messed up. That is a freaky looking zombie right there. Besides their looks, there is the interesting possibility of the zombies still having some intelligence, or memories. For example, Morgan’s zombie wife actually walks up to the door, and tries to open it. Another example is when the zombies are trying to break into the department store, and the one zombie is trying to break the glass door with a brick. There are also some good zombie kills. There is a quick but awesome decapitation at the end of the final episode. Another favorite is when Rick takes an ax to a zombie’s head when they are walking the streets disguised as zombies. When the zombies actually are attacking the humans, instead of snacking on animals, it is good to see the zombies get to sink their teeth into them as well.
The emotional moments, and awesome zombies combine to make a good first season of The Walking Dead. It will be interesting to see what they have in store for next season considering they may be using freelance writers. Will they stick with a heavy does of emotional moments, or lean in the direction of more zombie action? They could go in a completely different direction, which would be surprising after the success the show has already achieved. To finish this off, I leave you with some questions that hopefully will be answered next season:
-Where will the group of survivors go next?
-Will they find Merle, or will he find them? And where is his hand?
-When will Rick find out his wife and Shane slept together?
-What will be added to the zombie menu (reference random thoughts on episode 3)?
-What did the crazy doctor whisper in Rick’s ear?
-Will we see Morgan and his son again?
-Will Rick’s son ever finish his homework?
-What other characteristics will these zombies have?
-Will we get to see zombie Jim?
-Who will be the next member of the group to be bitten by zombies?
HorrO
Check out my random thoughts on the episodes: Horror on TV