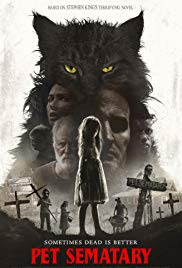 Dr. Louis Creed and his wife, Rachel, relocate from Boston to rural Maine with their two young children. The couple soon discover a mysterious burial ground hidden deep in the woods near their new home.

We continue to be in the new era of Stephen King. This time comes the remake of “Pet Sematary.” Not a bad choice, but do we need another remake…probably not. Regardless, it’s here so lets talk about it!
Maybe it’s knowing what’s coming, but the first half of the movie seems to drag. The family moves to the new town, and settles into their new home. Curiosity gets the best of Ellie (Jete Laurence), as she investigates the pet sematary. Before she can get into any big trouble, she meets the nice yet odd neighbor Jud (John Lithgow.) John seemed like a great choice to play this role, but something just didn’t click there. He’s still good, but just didn’t come off in the same way Fred Gwynn did.
The movie picks up once the truck comes barreling down the street, and takes aim at (hopefully the trailer ruined it for you and not me)… both kids? Yes, the trailer gives away the twist, which is terrible, but the way they shoot the scene is really good. Both kids are in danger, but one ultimately pays the price. The scene still pays a little bit of tribute to the original, yet finds a way to be its own.
Besides the truck scene, they also had to decide how they wanted this to end. Again, a little of the same, but then they take it in an even darker direction. Using an older child this time around allows for Ellie to be more physically and verbally abusive to her parents than Gage. As creepy as the Gage was, this approach holds its own. Call the final scene dramatic, ridiculous, freaky or whatever, but it will leave audiences wondering what’s next.
So here’s another remake that is what it is…another remake. The beginning is slow probably because most already know the story. The twist is the biggest thing in the movie, and should have been nice to witness in theaters with how the scene plays out. However the marketing department, who should be fired, ruins it by showing audiences the twist in the trailers. They kind of make up for it by making the ending their own, but it’s not enough to “wow” the masses. With that, I give “Pet Sematary” 2 pools of blood.

HorrO
Posted by HorrO at 3:53 PM No comments: