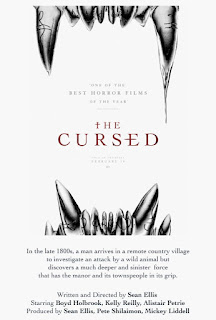 In rural 19th-century France, a mysterious, possibly supernatural menace threatens a small village. John McBride, a pathologist, comes to town to investigate the danger - and exorcise some of his own demons in the process.

Directed and written by: Sean Ellis

Check out the video above and find out how many pools of blood it received... 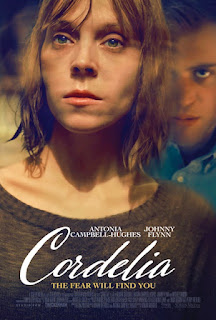 Following an incident in her past, Cordelia now lives with her twin sister, Caroline in their late father’s basement flat.

“Cordelia” seems like a nice woman, but she definitely has some issues. Some of those issues aren’t necessarily Cordelia’s (Antonia Campbell-Hughes) fault, as a promising acting career was cut short. Now she’s acting on a much smaller stage, and just trying to get by. She'll have the challenge of just getting by when she's forced to stay in her apartment alone while her sister goes away with her boyfriend.

Leaving her alone in the apartment opens the doors to fears and paranoia. She hears things all around her, and it makes her uneasy. Some of it is actually her neighbors, and in one situation it’s a mouse. Not helping are apparent strange phone calls she gets, which leads her to think someone is stalking her. Soon enough, she takes some comfort in befriending Frank (Johnny Flynn), one of her neighbors. At first it seems like a well timed meeting of two people who could help each other, but it eventually goes down a bizarre road.

For those looking for a slow burner, this is definitely it. The film is in no hurry to reveal anything big, and takes its time unfolding the layers of Cordelia. The audience may never get a real hold of what her issue is. They just know she’s scared to be alone, and not quite sure what’s going on around her. Is she really being stalked, or is it all in her head?

Which leads to her strange and brief relationship with Frank. There’s something odd about him too, so it seems like they’re a good match. The audience might not be sure if it’s something romantic between the two, or just two people who need another person with them. Then again, the door is open to Frank being the stalker. Apparently he’s had a eye on Cordelia, but not close enough as he failed to realize her twin lives with her.

By the time the film nears a conclusion, there will be plenty of questions popping up. Some will be answered, and some will be left to the audience to figure out. However, there’s no question that there’s something wrong with Cordelia. As soon as she’s isolated from her sister things begin to unwind for her. The film slowly gives the audience a peek into her life, but there seems to be much more they don’t tell us. With that, I give it 3 pools of blood. 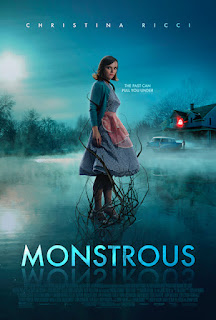 A terrifying new horror awaits Laura and her seven-year old son Cody when they flee her abusive ex-husband and try to settle into a new life in an idyllic and remote lakeside farmhouse. Still traumatized, their physical and mental well-being are pushed to the limit as their fragile existence is threatened.

Something “Monstrous” is lurking, and it’s not going to lead to a happy ending. Laura (Christina Ricci) and her son Cody (Collen Camp) are on the move to a new home. Laura has rented a new home by a lake, and is set on starting a new life with her son. She’s happy to be there, and tries to get them settled in as best as she can.

On the other hand, Cody isn’t exactly excited about this. He’s another kid that doesn’t understand why they had to move, and wants to go back. Unfortunately, this isn’t possible because they’re running away from his father who apparently has been abusive. Cody goes along with what his mother says until he starts to believe there’s a lady in the lake. A monstrous lady in the lake that is about to come in-between mom, and son!

For a movie called “Monstrous” it’s extremely bright and colorful for a least the first half of the film. The audience won’t be able to miss the brightness even though something mysterious is going on here. Even Laura is as cheery as the film is bright. She’s especially happy and polite with everyone to start. It does everything to embrace the 50’s setting, including a nice creature feature scene that Laura watches, and becomes apart of.

Once Cody insists on there being a lady is the lake things start to unravel. Laura’s no longer so nice with people, and even struggles not getting too rough with Cody. She continues to tell him to do things that he doesn’t want to do. There are some odd moments with Cody and his classmates that are going to be a clue for things to come. It’s a little surprising how creepy those scenes are because they seem like such a typical moments.

While those moments are good, the audience will be more interested in the scenes between Cody and the lady in the lake. They’re weird and mysterious, but never get too monstrous. The true horror turns out to be the abuse, mental stress, and struggling relationship between mother and son. Hence, why the film goes from happy and bright to dark and strange. Things will be topped off with a twist, which may or may not work for everyone. With that, I give “Monstrous” 3 pools of blood. 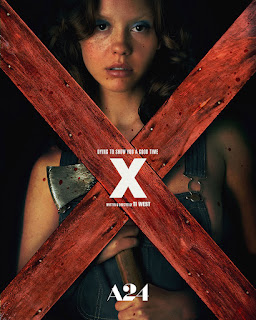 In 1979, a group of young filmmakers set out to make an adult film in rural Texas, but when their reclusive, elderly hosts catch them in the act, the cast find themselves fighting for their lives.

Directed and written by: Ti West