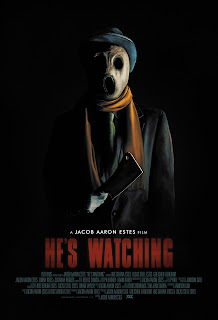 A brother and sister discover a presence in their home while their parents are in the hospital suffering a mystery illness that seems to only affect adults. The siblings team up to discover what the presence is and how to escape it. 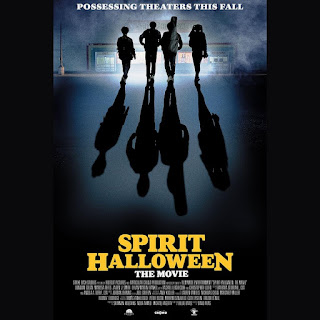 When a Halloween store opens in a deserted strip-mall, three friends, thinking they've outgrown trick or treating, decide to spend the night locked inside. But their night of spook-filled fun soon turns to outlandish survival. 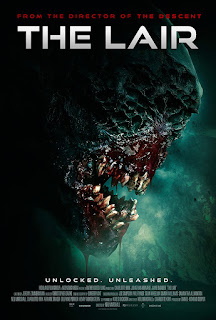 When Royal Air Force pilot Lt. Kate Sinclair is shot down over Afghanistan, she finds refuge in an abandoned underground bunker where deadly man-made biological weapons - half human, half alien - are awakened.

THE MEAN ONE REVIEW 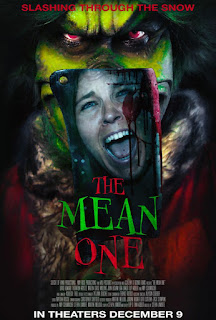 In the audacious new parody, The Mean One is a hairy, green-skinned grump in a Santa suit, living on a mountain high above the town of Newville, despising the holiday season. Young Cindy You-Know-Who, whose parents were butchered by The Mean One twenty Christmases earlier, is returning to town to seek closure… but when the Mean One launches a new reign of terror that threatens to destroy Christmas, Cindy finds a bold new purpose – trapping and killing the monster.

Written by: Flip and Finn Kobler

Check out the video above and find out how many pools of blood it received... 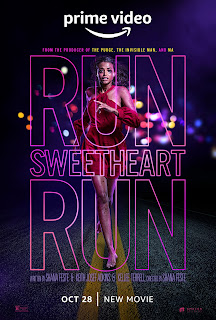 After what seems to be an innocent date, Cherie now faces a night of terror when her date hunts her down and tries to kill her. She now must run for her life throughout the city and escape his grasp. 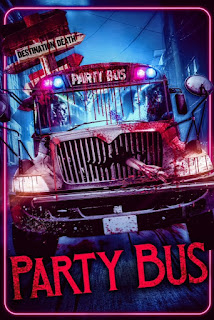 AUSTIN’s friends have gone above and beyond to make his Bachelor party one to remember. Unaware, he and his friends board the PARTY BUS with his ex-girlfriend and some shady people from his past for the ride of their lives.

Directed and written by: Carlos Berber

Celebrating on a “Party Bus” seems to be a thing these days, but maybe not after this one. A private event is going on to celebrate Austin (David Samson) getting married. The drinks are flowing, and the drugs are kicking in when Jennifer (Elley Ringo) arrives. She’s searching for Austin because she wants to have an important conversation with him before he gets married. It doesn’t seem like the right place or time to have this kind of talk, so why not move it to the party bus.

Before Jennifer can get to the reason for being there, Austin along with certain guests are invited to get on the party bus. The bus is a big surprise, but the arrival of Austin’s brother Sean (L.C. Holt) is an even bigger one. The two have a short reunion, and then the party ends. Sean reveals he’s in complete control of the bus, and has some bad things planned for those onboard.

It won’t take long for Sean to demonstrate just how far he will go. His first kill is wild, but is also done with a touch of humor. There won’t be much laughing after that, as this ride is going to be shorter than expected for most of the passengers. There will be plenty of shooting, stabbing, and decapitations on this trip. Hell even those who didn’t get on the bus are left for dead.

When blood isn’t spilling, there’s a search for truth, and lessons about relationships. Austin is still at the center of everything, as many of his so-called friends have secrets that effect him. Some will get to spill the beans, and others won’t live long enough to spit it out. Things will certainly come to a head, for those who still have one.

“Party Bus” is a party for those looking for heads to roll! Before the bus even pulls away the death count will rise. It doesn’t get much better for those on the bus, as most of them have a one way trip to their doom. Austin will have a lot to learn about truth, and friendship before it’s too late. With that, I give it 3 pools of blood. 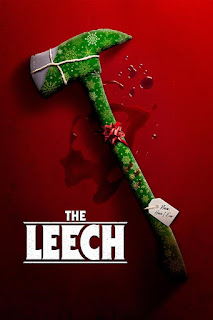 A devout priest welcomes a struggling couple into his house at Christmas time. What begins as a simple act of kindness quickly becomes the ultimate test of faith once the sanctity of his home is jeopardized.

Directed and written by: Eric Pennycoff

An unwanted house guest might be described well as the “The Leech.” Father David (Graham Skipper) is about to close the church for the day when he finds a man sleeping inside. He sends him outside only to soon find out he has no where to go. Trying to do the right thing, the Father invites Terry (Jeremy Gardner) to stay with him.

Terry quickly proves to be tough to live with, and things get that more complicated when his girlfriend Lexi (Taylor Gardner) shows up. Father David opens his doors to her too with the hopes of bringing some religion into their lives. This ends up being a bigger challenge then he thought, and will test his own faith in the process. Who will when this battle of good vs evil?

Graham and Jeremy are so great in this movie. They play off of each other so well, as their characters are in a constant battle against each other. They get to play two very interesting characters that are at the heart of the film. Terry is definitely a houseguest no one would want living with them. Just when Father David seems to get him in check, he swings right back to his crazy ways. It just gets even worse once Lexi moves in along with more drugs and alcohol.

Up front it seems like Father David is just doing God’s work. However the more he fights for the souls of the couple, the more it seems like he’s fighting some ghosts in his past as well. Not to mention the creepy picture of his mom he keeps on the wall along with her ashes. There are plenty of crazy moments created in this house all the way until the end.

There’s Santa, the Grinch, and now “The Leech.” While not a killer Santa movie, it will definitely make people think twice about opening their homes to others during the holidays. Father David has the right intentions, but he simply got more than he bargained for with Terry and his girlfriend. It won’t take long for this to turn into a battle of good and bad with a lot of wild things happening. Graham and Jeremy really bring these characters to life, and will have the audience glued to their craziness. With that, I give it 3 pools of blood.

More about this film at: http://promotehorror.com/2022/11/28/arrow-unwraps-the-leech-for-a-horrifying-holiday-with-the-release-of-december-svod-lineup/ 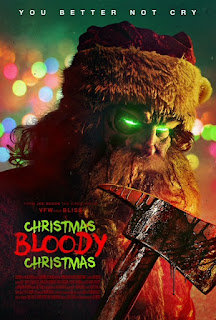 It’s Christmas Eve and fiery record store owner Tori Tooms just wants to get drunk and party, until the robotic Santa Claus at a nearby toy store goes haywire and makes her night more than a little complicated. Santa Claus begins a rampant killing spree through the neon drenched snowscape against a backdrop of drugs, sex, metal and violence, ultimately forcing Tori into a blood splattered battle for survival against the ruthless heavy metal Saint Nick himself.

Directed and written by: Joe Begos

“Christmas Bloody Christmas” might make for a good holiday jingle, but actually makes a killer Christmas themed horror movie. It’s Christmas Eve, and while most families are getting ready to open gifts, Tori (Riley Dandy) just wants to party the night away. She’s accompanied by a friend and fellow employee, Robbie (Sam Delich). As the night goes on the two grow closer and closer in conversations about all kinds of things. In typical horror fashion once the two hook up the terror kicks into full gear.

Apparently a company has sold some popular robotic Santas for the holiday season. Most stand in stores spreading their holiday cheer, but unfortunately for this small town they got one of the few that have malfunctioned. Now this animatronic Santa has come alive, and has its glowing eyes set on killing everyone in its path!

Instead of being a robot from the future, what if the Terminator was a killer robot Santa? This Santa will definitely have fans thinking of the Terminator by the time this one ends. It won’t use guns, but will prove to be hard to destroy. And those eyes…just bringing true fear to all of its victims. It won’t end until those eyes stop glowing.

As the audience gets to know Tori early on, they will know that she won’t go down without a fight. She’s a firecracker, and has no interesting in dying on this night. Animatronic Santa produces some good kills, but going head-to-head with Tori is fun to watch. It might not be equal to some Terminator action scenes, but they make the most of it.

“Christmas Bloody Christmas” is interested in truly making it a bloody Christmas. It doesn’t spend a whole lot of time explaining why the robot has gone nuts, and that’s alright. It’s here to kill, and will do so as long as those eyes are glowing. Tori and Robbie will keep the audience entertained just long enough. Then it will be time to watch the robot bring the gift of death to as many people as it can. With that, I give it 3.5 pools of blood.

In theaters and Shudder December 9th 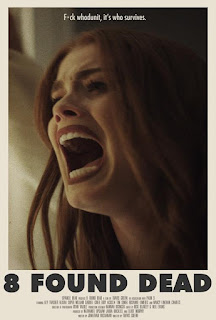 A home invasion flick for the Airbnb generation. It follows two couples who drive to a secluded house in the desert for a weekend getaway, each carrying their own baggage, expectations, and secrets. Upon arrival, they’re met by an older couple who claim to have rented the house themselves. 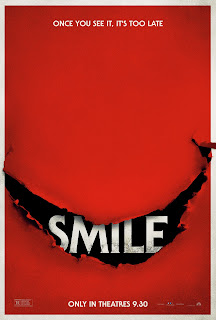 After witnessing a bizarre, traumatic incident involving a patient, Dr. Rose Cotter starts experiencing frightening occurrences that she can't explain. Rose must confront her troubling past in order to survive and escape her horrifying new reality.

Directed and written by: Parker Finn