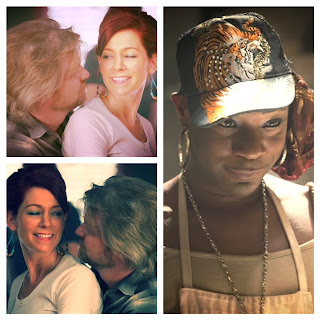 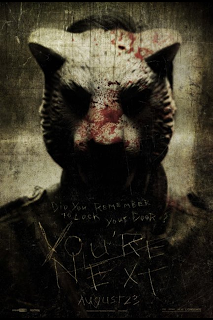 When a gang of masked, ax-wielding murderers descend upon the Davison family reunion, the hapless victims seem trapped... until an unlikely guest of the family proves to be the most talented killer of all.

Writer: Simon Barrett
"You're Next" is next in a growing line of home invasion themed horror movies. It starts off with the typical token death of some unimportant characters. They waste little time making use of the phrase 'You're Next,' as it’s written on a sliding glass window. The scene ends with the splattering of some pretty fake looking blood leading me to believe this was going to be a long movie.
From there the audience is introduced to the wealthy Davison family, as they begin to show up to their vacation house little by little. Apparently it has been a while since Paul (Rob Moran) and Aubrey (Barbara Crampton) have had their entire family together under one roof. Their three sons and daughter each bring their significant other with them increasing the eventual body count. Just as the introduction begins to weight on the audience the fun begins.
A fox, tiger, and lamb attack the family. Wait, when did this become a nature film, and what’s so scary about a lamb? All right, a fox, tiger, and lamb don’t actually attack them. Those are the faces of the masks used by the "ax-wielding murderers," which turn out to be a little more intimating than originally thought (including the lamb). These murderers are pretty good at what they do, and come prepared to make quick work of this poor unsuspecting group.
As these murderers begin to pick off the family members, and their guests, horror fans are left wondering just how is this going to turn out any different then any other home invasion horror movie. Most of the time the victims panic, and anyone who survives basically does so out of luck. Well, not this time. The difference is that one-person steps forward, and actually takes the fight right at the murderers.
Erin (Sharni Vinson), one of the son’s girlfriends, is that person. At first it might seem a little ridiculous that she’s actually fighting back, but it doesn’t take long before the audience buys right into what she’s doing. What sets Erin apart from other characters that have survived in this kind of movie is that she doesn’t rely on luck. She knows exactly what she needs to do in order to “Survive the Night.”
Yes, that brings me to a quick look at why “You’re Next” accomplishes everything audiences wanted to see in the other big home invasion movie of 2013, “The Purge.” “The Purge” has a good story behind it, but it never gets as bloody and brutal as the story sets it up to be. Also, it doesn’t quite establish a character to really root for. “You’re Next” easily accomplishes both of these things. There is plenty of blood spilt both from the helpless family and friends, and the murderers. And Erin, well she just might be one of the easiest characters to root for in a long time.
Erin completely takes over the movie once she begins to fight back against the masked men. The audience gets right behind her, and the movie becomes extremely entertaining to watch. They might even go a little over board with the entertainment, as they decide to play some almost ridiculous music during the final moments of the movie. Besides some questionable acting to start off with, it’s truly my only complaint about how this movie turns out.
There are some twist, and turns in the story. Some aren’t too hard to figure out if the audience has ever seen this type of movie before. After the movie is over, the audience can go back, and see the clues to why this took place. It really becomes more of a matter of when are the twists going to be revealed then not expecting them. To add to the fun, they set up for a particular moment to happen, and keep the audience on the edge of their seat waiting for it.
“You’re Next” might get off to a suspect start, but it surprisingly becomes an absolute pleasure to watch. Sharni Vinson puts on a terrific performance, as she quickly gets the audience on Erin’s side. She effortlessly makes her character seem so sweet and innocent, and then turns her into a killing machine. There are plenty of victims suffering some brutal, and bloody deaths. While the twists might not be hard to figure out, they in no way hurt the story. If you liked “The Purge,” or thought it needed to be upgraded, than you should find “Your Next” even more to your liking. With that, I give this movie 3.5 pools of blood.

Seriously… 4 years already! Where has the time gone? Honestly, I can’t believe I’m still doing this. Don’t get me wrong I love it! However, when I started this four years ago, I would have never thought I would be able to keep up with it, but I love my horror movies.
So let me start by thanking all of you for the support. I know there are many of you that have been with me from the beginning, and that means a lot. I'm thankful to have formed so many great relationships with people from the blog, to Twitter, and Facebook. It has truly been a fun ride. For all the people who I’ve recently met, I appreciate the support, and thank you as well.
This has been a big year for HorrO’s House of Horror mostly thanks to PromoteHorror.com. For those of you that remember, I introduced PromoteHorror.com right here two years ago. That’s right, it’s also celebrating an anniversary today. The site has taken a lot of time to maintain, but it has also been a blast. If you haven’t seen it yet, please stop by. You can also follow it on Twitter, and “Like” the Facebook page.
I can’t go without mentioning The Dog Days in Zombieville, my Twitter story that is still going. Yes, it will end one day, but the questions are when and how. For those who don’t know, DDNZ is the journal of Max Wagner, as Max has documented his fight for survival in Zombieville. As a reminder, you can still catch the story from the beginning, as there are links to each year of the journal. The story is posted on Twitter first, and then on the site. There is also a Facebook page that I post zombie related things from time to time.
October is on the way, and the fun will really begin. Hopefully I will be able to find something new, and exciting to share with you. Of course, I will bring you all of my adventures from Halloween Horror Nights, and hopefully Spooky Empire too. And I can’t wait to see all of your Halloween costumes. It’s really fun to post those pics, and see what everyone has come up with.
After four years I don’t really know what else to say, so I’ll wrap this up. Again, thank you all so so so much for all the support. Thank you to everyone who has taken the time to listen to me. I really appreciate it, and look forward to doing a 5-year anniversary post!

HorrO
Posted by HorrO at 8:52 AM No comments: 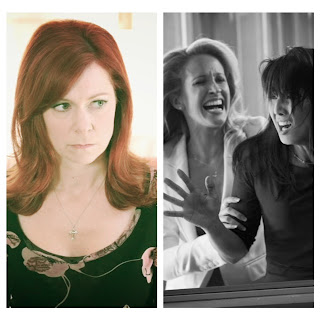 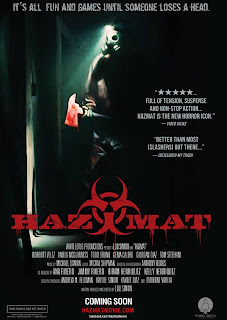 The television crew of the "Scary Antics" hidden camera show sets up a disturbed young man for a practical joke, but the joke is on them when heads roll.

There are several things to like about “HazMat” starting with the story. Having the tables turn on a film crew who is suppose to be doing the scaring makes for a good story. As the audience sees in the opening scene, “Scary Antics” is usually the one playing the joke on an unsuspecting victim. It isn’t so funny when the joke is on them.
The crew sets up for what appears to be another great scare in a chemical plant. The plant turns out to be a great place to have a bunch of people slaughtered, as it’s dark, quiet, and almost impossible to escape if you don’t know where you are going. The crew sets up hidden cameras around certain parts of the plant, and watches from a control room. However, there are plenty of other areas that they never got to, which are perfect for a killer to hide.
Speaking of the killer, sometimes one is born when a cruel joke is played on them, and that is exactly what happens here. The joke is supposed to be on Jacob (Norbert Velez), who has been brought there by his friends. That is where is father died, and his belief that the place is haunted makes him an easy target for his friends. What his friends fail to realize is that it appears that Jacob might have had a little crazy in him already, and the whole joke pushes him over the edge.
As with any good slasher, Jacob would need to disguise, and a signature weapon. Jacob finds a chemical worker’s suit, mask and ax, and the real fun begins. What’s great about Jacob as a killer is that he doesn’t hold back. Every opportunity he has to go after someone, he goes after them with everything he has. He chases them down, and buries that ax right in them. Each time the audience is treated to a different look at the deaths with plenty of blood splatter.
As you can see there is a lot to like about this film. It would have been easy to expect some bad acting, but it’s solid all around except for maybe in a moment or two. The only real complaint here is that the film starts off a little slow. It has to introduce the crew of “Scare Antics,” and establish connections between them. It’s a little boring, but the film more than makes up for it when the audience gets to see their fate.
Overall, “HazMat” is a pleasant surprise. It all starts with a good story about how things can go wrong when you play a joke on the wrong person. The chemical plant proves to be a great hunting ground, and there are plenty of victims. It’s good to see a killer be born, and one who goes after his victims so intensely. With that, I believe this movie is ready for a strong festival run, and give it 3 pools of blood. 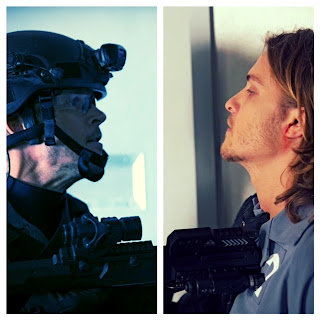