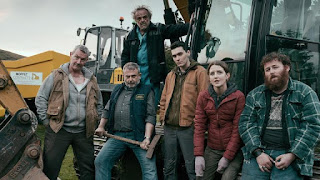 A crew of hardy road workers, led by a bickering Father and son, must survive the night when they accidentally awaken an ancient Irish vampire.

The county in “Boys from County Hell” sure does goes to hell when a vampire rises from the grave. Eugene (Jack Rowan) seems to be just going along with life spending time with friends when he’s not working for his father Francie (Nigel O’Neill). Eugene and a couple of friends hang out at the pub, and like messing with tourists who come through there. They take two tourists up to a pile of rocks where legend has it a vampire older than Dracula is buried. The audience gets briefed on the vampire, Abhartach (Robert Nairne), because he’ll be making an unexpected return soon.

Francie has been hired to clear the land where this vampire rests, and also land belonging to the family of one of Eugene’s best friends. On the following night they have an argument by the pile of rocks, and something unexpected happens that takes his friend’s life. Still upset over the loss of his friend, Eugene takes out his frustration on the pile of rocks. When the crew comes back to work later on, the strange happenings begin.

The opening scene will have the audience’s attention, and after setting up the story and characters it will get back to that kind of bloody fun. While it’s a vampire story, they take some risks and create some of their own rules. One of the best things that this vampire can do is suck blood out of people without even touching the person. The vampire doesn’t even need to be seen, and all the sudden someone will just start bleeding from somewhere on their body.

But before they even get to Abhartach, they must face off with more recently turned vampires. The first vampire is one of the workers who is turned, and what’s particularly funny here are the attempts to kill it. They try a couple of things that don’t work, and it becomes drop dead funny especially after they stick a pole through him. The second vampire is a little more of a surprise, and creates a more serious situation. However, no matter how serious things get, or bad the situation is there’s just the right amount of humor sprinkled in.

A lot of that humor begins with the relationship between Eugene and Francie. Francie loves his son, but he’s very tough on him. Eugene tries to please his dad, but that’s almost an impossible thing to do. Also, Francie is a very serious, no nonsense kind of person that just wants to do his job, and doesn’t have time for this vampire madness. Their back and forth over handling the vampires is always entertaining, and then sprinkle in moments with other characters like Claire (Louisa Harland) and SP (Michael Hough).

“Boys from County Hell” rolls the dice and wins big. Horror audiences continue to crave something new, and they bring something fresh in the world of vampires. The blood flows right from the start, and continues throughout the film. The blood and guts is done right, and there’s plenty of it. They reveal a bad ass vampire, and introduce a new and maybe even harder way to kill it. Not lost in it all are many humorous moments of this group of workers trying to figure out how to fight the vampires. The story is just terrific from beginning to end, and so is the acting. With that, I give it 4 pools of blood.