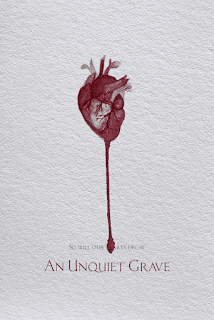 A year after the death of his wife, a man enlists her sister to help him bring her back.

“An Unquiet Grave” will remind audiences just how tough grieving the loss of a loved one is. Jamie (Jacob A. Ware) has been grieving the loss of his wife, Julie, for a year now. Somewhere along the line he got the idea of a way to bring her back, or at least part of her back. On the anniversary of her death, he gets his wife’s sister, Ava (Christine Nyland), to go on a drive with him with the intention of performing a ritual. As they drive to the spot of her death, there’s a lot of talk, and indecision from Ava over whether she can do this or not.

Of course once they get to the spot there’s no turning back. It’s dark and creepy out in the woods, but Ava is brave enough to go along with Jaime’s plan. Unfortunately, he hasn’t told her the whole truth. They will be reuniting with her, but in very different ways. It will be an awkward reunion, and one that eventually goes wrong. 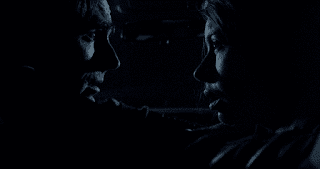 As the film goes on the audience will notice that this whole movie includes only two actors Jacob and Christine. That obviously puts a lot of pressure on them to perform, and they do a very nice job. There are other moments when things get weird and creepy, but dealing with the high emotions of the situation is the most important thing and they handle it well. Extra credit goes to Christine who is actually playing two characters in an unusual way.

They use grief to set the mood of the film right off the bat. Jaime and Ava have a depressing talk on the way to the grave, and the conversation doesn’t get easier when Julie returns. She’s confused about what happened, and why she’s returned. Before Jaime can get to really explaining what’s going on something has come looking for him. Again, it’s not necessarily about creating scares. It’s about creating a creepy atmosphere that matches the mood that set and maintained throughout. 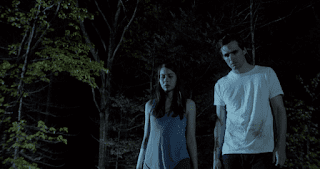 Disturbing graves has never been a good idea, and it’s still a bad idea in “An Unquiet Grave.” Yes, Jaime is grieving and filled with guilt, but instead of helping he’s about to make matters worse. He lies to Ava, and puts her life in danger to ease his pain. There might be many lessons learned from the film, but one is that there’s no easy way to deal with your pain. With that, I give it 3 pools of blood.

More info about this film at: http://promotehorror.com/2020/10/02/an-unquiet-grave-dramatic-new-horror-world-premiering-at-nightstream/