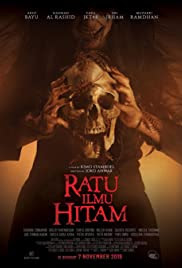 Families were terrorized at the orphanage. Someone wants them dead, apparently with black magic that is very deadly. She has a grudge and she was also born because of the sins of the orphans who formed her into the Queen of Black Magic.

“The Queen of Black Magic” has used her power to create one brutal and unnerving movie. Hanif (Ario Bayu) takes his family back to the orphanage where he grew up to see a dying father figure Bandi (Yayu Unru). They’re meeting up with two more of his friends from the orphanage, and their wives. It’s a long drive out to the middle of nowhere, and Hanif appears to hit a deer along the way. They stop to check it out, and then finally make to their destination. Soon enough, introductions are made, and people start to get settled in.

Hanif gets the feeling that maybe he hit something else out on the road, so one of his friends goes with him to check it out. He turns out to be right, but they also find something much more tragic has occurred out there. They don’t have many options on how to handle this, and head back. Unknown to them, things are about to go wrong there as well. An evil magic starts to take over the orphanage, and everyone inside of it.

Being an Indonesian film, the audience can expect only the worse to come to the people in the orphanage, and those expectations are met and then some. First it starts off with some creepy and crawly centipedes going in and out of people, choking them, and just being disgusting. But think of them as the appetizer. Things get far crazier with what one woman does because she’s worried about her weight, and how another boy is forced to torture himself and another.

And why is this all happening? Well in the middle of the wild things that are happening a story is told about some of the women who lived in the orphanage. From Hanif and his friends standpoint a certain set of events happened, but in actuality something much worse was going on. They saw some magic when they were younger, but now they're going to feel the full force of black magic. The Queen is out for revenge for those past events.

So yes, they’ve created a good story, and reveal it in the perfect way, but lets go back to the true magic of the film. The absolute brutality that the Queen unleashes in the final act will forever be hard to match. She literally tortures everyone who is still alive at this point, and makes one survivor hopelessly watch it happen. She has no mercy on any of them, and now is about to get her ultimate revenge. This moment is full of its own surprises to top off everything that has just happened.

“The Queen of Black Magic” continues the streak of movie magic that keeps coming out of Indonesia. It creates a large cast of characters to do all kinds of evil things to. They start off with the disgusting stuff, fit in a few scares, but the focus is definitely on being savage. There have been movies where people are tortured maybe one or two at a time until it moves to others, but the ending scene here is just vicious. Multiple people are being tortured in harsh fashion, and having someone watch is just cruel. For fans of this kind of horror you can’t ask for much more. All hail the Queen, as I give it 4 pools of blood!