THE LAST HOUSE ON THE LEFT REVIEW (Unrated version) 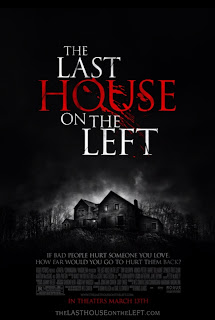 So you are relaxing one night at your summer home until some strangers show up at your door claiming to have been in an accident. Being the nice people you are, you let them in (never a good idea), and offer them the guest house for the night. You have a feeling that there is something not right about them, but hey, stranger things have happened. You are about to call it a night and then there is another noise outside. What now? Your 17 year old daughter is at the back porch about half dead. You bring her inside and do everything it takes to save her life. In the process, you find out that the people who have just beaten, shot, and raped your daughter are sleeping in your guest house. What would you do (thoughts of Hostel, Saw come to mind)? Oh yea, let the fun begin!!!
This movie definitely pulls at your emotions for the different characters. I was surprised they didn't make you feel more for Mary (daughter who is almost killed) before she is actually taken hostage, but they make up for it quickly. The girl is beaten, watches her friend get stabbed and bleed out slowly, raped, shot, and left to drown. Sometimes people find ways to feel for the bad guys in movies, but not this one. They get what they deserve! And Justin, Justin, Justin... what a screw up! The movie makes you have mixed feelings about him. Should he be punished for being part of this or does helping out the parents make up for it? He started all of this just because he wanted some cigarettes and maybe a little attention. And the parents, who could blame them for what they did.
So what did the bad guys deserve? Everything and probably more than what was given to them. For those who love lots of blood, well they give you plenty of it. You have to love everything that happens to Francis, who is an ass, beginning with the car crash (thought it was cool how the car was ping ponging off trees). He ends up breaking his nose, but you really don't get to see how bad it is until Mary's dad (a doctor) fixes it. Did you feel the same pain I did as he resets the nose back in place, and then sticks a needle in it? Nice touch leaving the needle there to fix the lights before finishing sewing up his nose, ouch!!! But this is nothing compared to what happens after the parents find out what happened to their daughter. The mom and dad tag team against him, drowning him in the sink. But we need blood so stick his hand in the disposal. There we go, and then bash him in the head one more time. I noticed that since the dad is a doctor he wasn't as affected from the all the blood like the mom was.
More blood you say. Bring it on! How about a nice gun shot right through the eye? I liked that better than the typical shoot them in the head, or chest 50 times. Kill of the night, had to go to the bad father. Suffered the same fate as TV dinner left in the microwave too long. Liked the head explosion, but I was thinking maybe his head should have melted. What do you think? Speaking of blood, I wasn't rooting for Paige to die, but I liked how they stabbed her in the front and the back, and did it smoothly. Plus the one extra stab for the road. Also, thought it felt real when Mary was shot while swimming away, and the blood spilled into the water.
Some other thoughts on the movie. I have never seen the original version of the movie so I can't compare it (sorry). Tired of seeing a cop car pull up to train tracks with a criminal in the back... everyone knows what is going to happen. Not much is specifically mentioned about the brother that Mary has lost. I thought maybe you would feel worse for her if you knew how he died, but his death amounts to giving her a reason to carry a necklace around. The movie explained away the cell phones, which almost every movie has to do now. Must be annoying for writers. I liked how it was dark and rainy at the end, but I thought it was just a little too dark. I couldn't catch everything that was happening. Noticed the mom and dad were better fighters as a tag team rather than alone. Also, so much for doctors dedicated to saving people. The small scenes with the shower pole and the microwave gave away there use later in the movie. I think they should have just left that as a complete surprise for later on (especially the microwave).
In the end, I liked this movie. It did a good job of pulling on your emotions for the different characters. I don't have a daughter, but it made me think about what I would do to seek revenge if I was in the same position. As opposed to seeing a lot of victims get killed, it was nice to see a lot of bad guys spill blood. Good story about revenge and guilt, enough blood, so this movie gets 3.5 pools of blood!!!
HorrO
Posted by HorrO at 10:42 AM