I WAS A TEENAGE WERESKUNK REVIEW 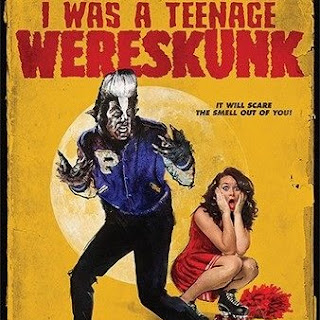 A comedy homage to the drive-in monster movies of the 50s.

Directed and written by: Neal McLaughlin

A couple of years ago, the comedy horror “WolfCop” was a pleasant surprise combining a werewolf and cop. Now horror fans are in for another surprise hit “I Was a Teenage Wereskunk.” That’s right, a combination of a werewolf and skunk. After reading ‘Wereskunk’ in the title, audiences might think this is just another cheesy sci-fi type film. Well, it’s nothing like that at all. There’s a creative character driven story from beginning to end bringing fans back to the monster movies of the 50’s.
Curtis (Scott Monahan) is a teenager, who is just trying to fit in in his own awkward way. He’s close with a girl named Mary Beth (Shey Lyn Zanotti), who he eventually realizes he wants to go steady with. However, he has one big obstacle in his way…he becomes a wereskunk anytime he gets aroused! Being a teenager, he’s easily aroused, and victims start pilling up.
Good thing Sheriff Albright (Charlie Farrell) is on the case. He has two trusty partners, Deputy Gary (Melanie Minichino) and Officer Maggie (Amy Heidt) by his side. Deputy Gary is an absolutely hilarious character, and there’s a nice little twist with Officer Maggie. This threesome is a good example of how the unique characters are a strength for this film. The wereskunk isn’t the only special character in this story.
It’s great how the film never takes itself too seriously. There are times when Gary’s fake mustache is falling off, but they keep rolling on. There’s a scene where the wereskunk is ripping a woman apart, and they are clearly throwing fake body parts around. These things might be criticized in other films, but they just feel right for the way this film goes. Sticking to their characters, the actors always seem like their having a lot of fun.
Speaking of the actors, they do a simply superb job. Scott nails going from an awkward teenager to mean wereskunk. Charlie does well starting off as the manly father/sheriff, and later a coward in the face of danger. Special credit goes to Melanie for playing both Curtis’ mother, and the film’s most outrageous character Deputy Gary. She’s funny as the mother, but absolutely hysterical as Gary.
“I Was a Teenage Wereskunk” is a well written comedy horror film. Combing a werewolf and a skunk might seem weird, but they make it work with a clever old fashioned style story. The wereskunk is just one of many great characters that drive this film. None of this works without the fabulous acting performances from the entire cast. If you’re a horror fan looking for something a little different, than I have to recommend this film I’m giving 4 pools of blood to!

*Stay until the end for after credit scenes

*If you want to know where you can find the film, check out its promotion at PromoteHorror.com here!
Posted by HorrO at 3:44 PM