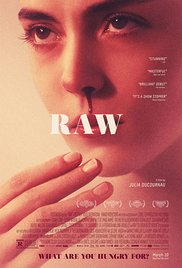 When a young vegetarian undergoes a carnivorous hazing ritual at vet school, an unbidden taste for meat begins to grow in her.

Directed and written by: Julia Ducournau

Once “Raw” begins, there’s an almost immediate strangeness to it. There’s an odd car crash that later proves very meaningful. Then the audience is introduced to Justine (Garance Marillier) and her parents, and the fact that they are serious vegetarians. They drop her off at vet school, which begins with a crazy hazing event and wild party. All of that is just the beginning of the strangeness that continues throughout, but helps lead to the greatness of the film.
The older students make the new students go through a period of hazing as an introduction to the school. Justine is more shy and reserved, and not really into this. Her older sister, Alexia (Ella Rumpf), who also attends the school and went through this hazing, is very much into it. She encourages Justine to participate, and go along with what they make her do. Part of the hazing results in Justine eating meat for apparently the first time, and this changes everything. She seems to just get sick, but soon becomes addicted to meat.
Her hunger starts to take over her life, and makes her do some strange things. She eats and eats whether or not the food is cooked or raw. Also, she goes from being the awkward, sexually inexperienced girl to a very outgoing girl with an appetite for sex second only to her taste for flesh. This creates some pretty intense, weird, and extremely satisfying scenes for horror fans. One of the most shocking scenes involves an incident while her sister gives her a Brazilian wax.
This amazing coming of age story is put together so well, and filled with so many great ideas. Start with the great idea to put a cannibal in a vet school, where she’s surrounded by live and dead animals. The whole thing with the car crashes is so creative. Just combining many of the common things a young person goes through  with the elements of discovering you’re a cannibal is done so smoothly. It’s all wrapped up in horrifying fashion along with a big twist that puts the finishing touches on the brilliance of the film.
To top it off the acting is superb. Garance nails all of her characters struggles, and not to mention her awkwardness. She’s never thrown off in the intense moments, and is a very believable cannibal. Ella also does a fabulous job. She handles playing both a good and bad sister perfectly, and the audience is never too sure which one she’s going to be.
“Raw” has everything an audience can want in a great film whether it’s horror or not. It starts with a terrific story from beginning to end about the coming of age of a young girl. It’s filled with amazing and intense scenes, and has a strange vibe about it along the way. Throw in the horrific cannibal moments that will put a smile on horror fans’ faces, and keep others on the edge of their seats. Both actresses nail their roles, and so does the rest of the cast. Walking out of the theater, I thought “that's why I love being a horror fan!” Because the film made me feel this way, I give it a rare and well deserved 5 pools of blood.