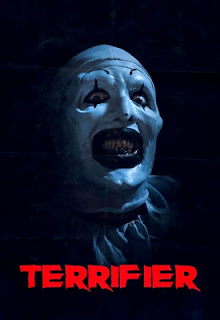 A maniacal clown named Art, terrorizes three young women on Halloween night and everyone else who stands in his way.

Directed and written by: Damien Leone

So why not follow up one review featuring a clown (IT) with another. While Pennywise is out for fear, Art the Clown (David Howard Thornton) is out to terrify! This story takes place on Halloween so for Tara (Jenna Knell) and Dawn (Catherine Corcoran) to see a clown out in the streets isn’t that unusual. Unfortunately for them, there’s something seriously wrong with Art.
After running into Art in the streets, the two drunk girls make their way into a small pizza shop. Not long after that, Art comes in, and sits across from them. He sits silently while making faces, and changing poses. While this creeps out Tara, Dawn decides to take a selfie with him. Knowing that Art wants to eventually kill them makes this such a crazy scene. As he does all movie long, he’s just mentally torturing his soon to be victims, which is something he apparently excels at.
When it comes time to kill, Art isn’t clowning around anymore. There’s several nice and bloody kills, but there’s one in particular that stands out. Without giving it away, lets just say it includes a tied up girl, a saw, and lots of blood. Yes, what takes place is clearly fake, but the fact that they go ahead and try to pull it off anyways is awesome!
Besides the blood, guts, and terrifying moments, the characters and performance of the cast make the movie easy to watch. Tara and Dawn are entertaining in the brief time Art isn’t around. Tara has an issue with Art from the beginning, and does her best to fight back. Jenna does a great job with both being afraid and then taking it to the clown. Catherine also does well being funny in the face of Jenna's fear.
Without a doubt, Art the Clown is the star in this circus of a tale. David does a terrific job playing him, especially considering Art never says a word. Not talking and mentally messing with his victims before finishing them off really works for him. The story is easy to follow, including the connection between an odd beginning and the end of the movie. It also takes some risks, which can be appreciated. If you’re looking for blood, guts, and a silent creepy clown terrifying his victims, then “Terrifier” is for you! With that, I give it 3.5 pools of blood.