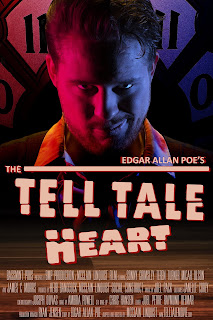 Following the Narrator, who is haunted by the “evil eye” of the Old Man whom he cares for. Descending further into madness, the Narrator murders the Old Man in his bed and then hides the body under the floorboards. When Detectives Tucker and Office Sharpe come to inquire about the old man’s whereabouts the Narrator frail mind begins to unravel.


Has anyone ever given you the ‘evil eye?’ Wonder what their problem was, or maybe you wanted to do something about it but never did? Well the Narrator in this story becomes obsessed, and even goes mad because of the evil eye of the Old Man he cares for. In this case, the Old Man actually has an evil eye, or at least an eye with something wrong with it.
The Narrator tells a tale of how he takes care of the Old Man like he’s supposed to, but can’t shake his evil eye. Day by day, night by night, he begins to plan a murder. He finally pulls it off, but not as perfectly as he thought. He’s brought on the attention of neighbors who now have the cops and a detective at his door. They want to know where his Old Man is, and put the screws to him until he cracks.
From start to the finish of “The Tale Tell Heart,” the Narrator does an excellent job of pulling the audience into his crazy tale. He seems to have everything under control with unique style of talking and well dressed look, but madness turns him inside out. There’s no happy ending here, as it gets much bloodier than the audience might have first suspected. Part of his descent into madness includes an excellent back and forth of him being questioned in the Old Man’s room, and at the police station. Because of the way this tale is told the audience might feel they are spinning out of control as well, which means that this short film has done its job. Make sure to catch this one coming soon, or I’ll be giving you the evil eye!