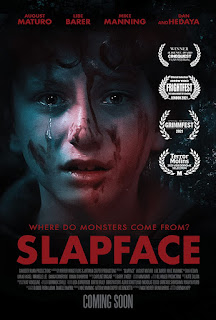 A boy deals with the loss of his mother by creating a dangers relationship with a monster rumored to live in the woods.

Directed and written by: Jeremiah Kipp

“Slapface” starts as a game between brothers, but there will be no playing around by the time this one ends. Unfortunately, Tom (Mike Manning) and his younger brother Lucas (August Maturo) have lost their parents, and are left to live alone together. Tom isn’t ready for parental duties leaving Lucas a chance to find himself continually in trouble, and short on friends. Tom’s best parenting trick involves playing a game called slapface, where both brothers take turns slapping each other in the face.

It’s no wonder why Lucas searches out a group of girls for friendship. However, a pair of them decide it’s better to bully him around instead of becoming real friends with him. They convince him to go into a strange building that may be haunted. He takes their challenge and does find a monster living inside. While this monster might be dangerous to most, it finds a liking to Lucas that grows stronger over time. A liking that eventually becomes a problem for him and the people around him.

A big part of this film seems to be about the relationship of the two brothers and the situation they find themselves in, and certainly bullying. Tom loves his brother, but just isn’t prepared to take real responsibility of his brother. He thinks the game they play is for the good of both of them, but it’s clear to his girlfriend that the game is more abusive than anything. While the Tom might be dealing with the death of their parents a little better, it’s definitely weighing on Lucas. This is what opens up his search for friends, and even allowing himself to be bullied just to be liked. His abuse at home might make it seem like this is alright.

Everything he goes through also opens the door to his unusual relationship with the monster. It almost becomes a motherly figure for him, as it’s willing to protect him against anything. Horror fans will find what they’re looking for when the monster goes too far in protecting him. It doesn’t become overly bloody, but instead relies on keeping the monster as creepy as possible. There are definitely some great shots of the monster making the audience wonder how Lucas could ever be friends with it.

“Slapface” is a title that will get attention because it’s unusual, and get the audience thinking about what kind of monster they’ll see. The monster is dark, creepy, and will rack up some deaths. However the monster also has an unexpected motherly side, and befriends Lucas. The audience will get to see what Lucas goes through at and around home, and with the monster. Most likely they’ll feel for the boy, who struggles with bullying, and what to with a monster that appears to be his only true friend. In an age with lots of bullying, this is another horror film that does its best to highlight it. With that, I give it 3 pools of blood.

More about this film at: http://promotehorror.com/2022/01/20/whats-streaming-this-february-on-shudder/