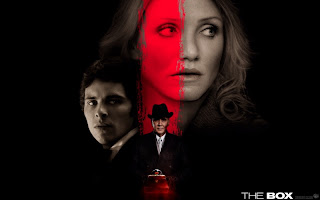 So an unusual box is delivered to your door, and several hours later an equally unusual guy shows up to give you a life altering decision. Your choice is to push the button on the box and receive one million dollars, or do nothing within 24 hours and return the box. Oh, but there is a catch of course! If you push the button, someone who you do not know will be killed. What would you do?

This was the decision that Norma Lewis (Cameron Diaz) was faced with. To make the decision complicated, she just found out that she will no longer receive a teacher discount for her son to attend school, and her husband was denied a promotion at work. A caring mother and overall sweet lady, she struggles with the decision with little help from her husband. If she said no, then there would not be much of a movie, so lets move on.

If I had to describe this movie in one word it would be “weird.” It kind of reminded me of something Stephen King would write. While it was weird, it was not the kind of weird that made for a bad movie. The weirdness was necessary to make everything in the movie work; from the box to Norma’s disability, and from the mysterious murder to the water portals. And do not forget the source of all the weird: Arlington Steward.

He was the man, or vessel as he said, that delivered the box, and set everything in motion. Everything about this guy was weird, starting with a piece of his cheek missing from his face. I thought it was rather interesting how they showed his face at different angles. Sometimes you could barely tell there was something wrong with his face, and other times they showed a perfect shot of his disfigurement. Obviously, they knew the audience would be staring at it so they changed it up every time they showed him. I thought this was shot well, as was the whole movie.

Back to the weirdness. As mentioned, Mr. Steward was a vessel controlled by some outside force. That outside force also gave him the ability to control peoples’ minds for a short time in order to watch Norma and her husband. At times, it seemed like half the town was watching them. Anyone he controlled was called his employee. They would give a creepy stare to Norma and her husband when they were watching them. One scene I particularly liked (which had plenty of weird) was when Norma and her husband were in the library. Neither knew the other was there as they searched for answers to explain the situation they were in. Once her husband found a clue, five employees (with that creepy look on their face), started to follow him as he tried to exit the library. He walked into a large study area and as he passed the people studying, they would simultaneously all turn and give him that stare. To make the weird point again, just see how he eventually exited the library, and tell me that was not weird.

As Norma and her husband were faced with a decision to make at the beginning of the movie, they are faced with an even tougher one at the end of the movie. Without giving anything away, let’s just say things come full circle. They got themselves into this mess by pushing the button, and now they faced the true consequences of their actions. The ending brought some suspense, and it made you feel for the situation they were in. You feel bad for them because they were in a tough position, and the movie does a good job of portraying them as good people.

A lot of weird things were explained as the movie went on, but that still did not take away from the weirdness. Basically, all the weird added up to another movie that proved that when humanity is given the chance to do the right thing, it will do the wrong thing. Remember, you have a choice to push the button, or just give the box back, and the wrong choice comes with consequences. Although it was a weird movie, I think it was still worth seeing, so I give it 2 pools of blood. Oh yeah, and if you were wondering, I probably would have pushed the button too!