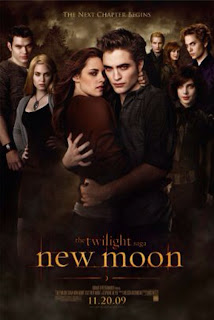 Okay horror fans, we just have to get over it. Just because there are vampires and wolves in this movie, it is a love story plain and simple. You cannot expect anything else from this movie. If you do, you will be greatly disappointed, not that you weren't disappointed with Twilight. To be fair, I went into this movie with an open mind, but it still did not work for me.

Throughout Twilight, we had to watch Bella and Edward fall in love with each other. Back and forth they went with the whole "I love you but we can't be with each other" drama. One minute they can be together, the next they can't. Really driving home the love story thing. Well, history repeats itself in New Moon. We started off with this struggle again, and Edward decided it was best that he leave Bella. This time his absence gave Jacob and Bella a chance to form a bond. However, just as it was with Edward, it became another game of "I love you but we can't be with each other." Too much drama, not enough blood I say. Bella learned that Jacob was a wolf so she ultimately must decide between being with a vampire or a wolf. What a choice!

Let me move this forward and discuss two things. The first being that this movie, even this whole saga, was just not for us horror fans. It was for teenage girls, women, and anyone that read the books. Horror fans do not want to see a story about a girl that has to decide between two guys' love. But there were vampires and a pack of wolves. It should be a the battle of vampires vs. werewolves. No sorry, it just was not. It was just drama, drama, drama! Stephenie Meyer has taken a shot at us all by making a joke of our beloved vampire. A vampire that sparkles in the light, give me a break. Vampires don't sparkle they burn. New Moon wasted no time in hitting us horror fans with this again as the story opened in one of Bella's dreams with Edward sparkling again. The movie takes another shot at us when Bella's friend puts down zombie movies after they walked out of the theatre. You ruined our vampire and then take a shot at zombies, not cool. Also, notice I refuse to call Jacob a werewolf. When "Wolfman" comes out, watch that, and tell me what the difference was between a real werewolf and this fraud Jacob. A shape shifter that was a wolf, please!

The second thing that I want to discuss is the movie itself, which is what I am here for after all. As you may have expected, there are many things that I did not like about this movie. Yes, there actually was a movie stuck somewhere in between all of the scenes of Jacob or Edward without their shirt on. A movie with a bunch of half naked women running around doesn't make for a good movie, and neither does one with half naked guys running around. I guess Jacob was just trying to save money on clothes considering he tears through them everyday running with his pack of wolves.

If you look past their naked bodies for one second, you would realize what a bad movie this was. Apparently, a lot of fans wanted New Moon to be more like the book, and they got their wish. I could see how this works as a book, but you have to make certain changes to make it work on film, which they don't. Let's start with the bad dialog, and the awkwardness between characters. To me, something just did not feel right when Bella talked to Edward or Jacob. It was just strange. It made me wonder if it was just bad acting, the dialog, or both. Speaking of the characters, can someone send out a search party for them? Most of the movie was just Jacob and Bella, with a little bit of Edward at the beginning and end. Give the audience a chance to breathe, and let there be some more interaction with characters other than those named Bella, Jacob, or Edward. Every time Bella saw her father it was two sentences, and he was gone again. The Cullen family was there at the beginning and that was it. The only one you see again was Alice. In a book, it works if you focus so heavily on a character like this saga does with Bella, but in a movie it does not. You need to see the movie from more than one perspective the entire time. I know it would have been different from the book, but they could have shown what Edward was doing while being away from Bella. They could have shown Jacob running with his wolf pack.

I was disappointed with the action scenes in Twilight, but had hopes of seeing something more in this one. I set myself up for disappointment again because I forgot this was about a love story, and not the action that was supposed to come when you have a movie with vampires and wolves. The one scene that the wolves actually fought a vampire was all cut up. You see a piece here and there, which really amounted to nothing. You get to see a lot of the wolves running, but so what. Let's see them fight. I mean, you make them all big, mean, and scary for no reason if you don't see them fight. Then there was the whole drama of Bella and Alice racing to save Edward from revealing himself to humans. It was over in two seconds. They had to show us a plane to prove that they flew to Italy. What they didn't swim there? And watch out, Alice and her racing down the street in a Porsche, and passing like two cars. Wow, exciting! By the way, if you want an example of a scene that was shot poorly, that was it. Look at the background while they were driving. It was so fake that it was ridiculous. Then we got to watch Bella run around the town to find Edward. The slow motion was the only thing that made it suspenseful. If not, she would have just run over to him, and that would have been it. No... she saved him ohhhh! And if you were waiting for a big showdown between Edward and Jacob, forget about that too! Just a lot of talk and no action. Dam love story!

This movie was not for us horror fans. We really have no business watching this, but we may have ended up seeing it because our significant other, or our lady friends wanted to see it. So when we see it, we are insulted by what they have done to our stories of vampires and werewolves. This whole saga was really a love story that just happened to use vampires and wolves. While it may have made for a great book, they really needed to do a better job of translating that to film. If I were rating this for the love story, I would probably give it 5 dozen roses. However, this is a horror site and I can't rate this movie with even one pool of blood if there isn't even a pool of blood in the movie. So I give this movie 0 pools of blood.