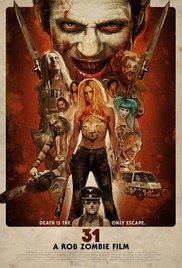 Five carnival workers are kidnapped and held hostage in an abandoned, Hell-like compound where they are forced to participate in a violent game, the goal of which is to survive twelve hours against a gang of sadistic clowns.

Directed and written by: Rob Zombie

Horror fans have been waiting a long time for the next Rob Zombie film, and it’s finally here. Audiences are sometimes split on his films, and they come with all kinds of expectations. Going into “31,” I wasn’t sure want to expect other than another crazy film. To some disappointment, it didn’t turn out to be as crazy as expected.
The story is actually kind of standard just set with maybe an unusual group of people. It starts off very much like “Texas Chainsaw Massacre” or “The Hills Have Eyes,” and soon enough becomes a game of survival like “Saw.” The difference might be the eventual victims, who aren’t a group of kids, or family. They’re a group of carnival workers, who might be the expected killers and not the victims in this case.
The carnival workers are held against their will in some kind of factory, and given twelve hours to survive in a game of ‘31.’ It’s not too clear what 31 is exactly other than a chance for Father Murder (Malcolm McDowell), and others to bet on the survival of the workers. What’s funny is how at the beginning of each round Father Murder recalculates the betting odds, and they are announced to the workers. Each round begins again with the death of either one of the workers, or killers.
The best part of the movie are the killers, which have some bizarre names. First there’s Doom-Head (Richard Brake), who’s absolutely insane and loves killing way too much. At the opening of the movie, there’s a great look at just how crazy he is in an up close conversation with one of his victims. Richard does a terrific job showing just how intense, and out of his mind Doom-Head is.
The next best killer is a totally unexpected killer. His name is Sick-Head (Pancho Moler), and he’s a little person. Not only that, but he’s a Nazi, who also speaks Spanish. Now you know why he’s such an unexpected character. Sick-Head is hilarious as he taunts his victims while hunting them down. And don’t be fooled by his size, he’s plenty vicious.
Overall, I expected a crazy story with some crazy characters, but didn’t quite get that. The story has a touch of crazy, but really is too familiar. Doom-Head, and Sick-Head are the type of crazy characters expected, and their scenes will be the most memorable in the movie. The other characters and acting is all right. However, casting Sheri Moon Zombie in her role makes the direction of the story kind of obvious. Wishing there was something more outrageous in “31,” I give it 2 pools of blood.