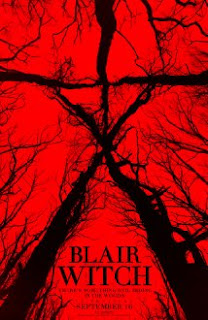 After discovering a video showing what he believes to be his sister's experiences in the demonic woods of the Blair Witch, James and a group of friends head to the forest in search of his lost sibling.

Lionsgate originally entitled this movie “The Woods,” which seemed intriguing enough. Then they surprised horror fans changing the name to “Blair Witch,” and let everyone know this is a sequel to the 1999 “The Blair Witch Project.” This sent a buzz through the horror community, and instantly made this one of the most anticipated horror films of the year. So does it live up to the hype?
Much of the beginning to middle of the film is complete story set up. It provides a few chuckles, but is mostly boring. The audience is presented camera view after camera view from all the characters, and it goes way too fast. Talk about a nauseating experience to start off with.
When it finally slows down just a little, it gives the audience a better look at all the characters, and how they are related. James (James Allen McCune) has been looking for his sister, Heather, who disappeared in the woods in the original movie. He brings along his good friend, Peter (Brandon Scott), and Peter’s girlfriend, Ashley (Corbin Reid). Lisa (Callie Hernandez) is accompanying them as a friend too, but also interested in documenting everything for a project. There’s nothing wrong with this group of characters except that it sadly doesn’t take long to figure out who’s going to die first.
They also spend time going through all of the different cameras that the characters are using. As expected, the technology is a clear upgrade over the original movie. The best thing the characters use are earpiece cameras that provide a good look at exactly what the characters are seeing. They even bring a drone along. However, as cool as it sounds, the drone proves to be pretty useless.
James and his friends finally pack up, and head off to talk with Lane (Wes Robinson) and Talia (Valorie Curry). They’re the people who posted the video that convinced James to go on this mission. Lane talks the group into letting them come along, and finally everyone ends up in the woods. However, not everyone is getting along on this trip, and there’s some tension before the real terror begins.
The first night fall couldn’t come any sooner, and it’s so time for the witch to start working her magic. The first true scare is all right, however they repeat it several times causing it to lose effectiveness each time. Probably the most shocking thing is what one of the characters does to another by accident. More of those kind of moments would have definitely been welcomed. For those that get squeamish, there’s a nice scene where one of the characters is pulling something out of their leg.
But what about the scene in the house? Well, this time the scene is extended out a little longer, and the audience gets to see a little more of the house. One of the characters ends up having to tunnel their way under it in a reasonably claustrophobic moment. There’s a surprise or two, but just like the rest of the movie, it’s just too much of the same.
With “The Woods” fans were hoping for something new. When it became “Blair Witch” that hope died, and did so in a big way. While this movie offers new characters, technology, and some more backstory, there are too many times when it feels all too familiar. The one thing it really should have kept but left out are the personal and intense moments that truly made “The Blair Witch Project.” While it’s the true sequel fans never got, it’s not a stretch to say that the sequel doesn’t live up to the original. With that, I give it 2 pools of blood.