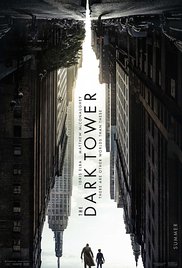 The Last Gunslinger, Roland Deschain, has been locked in an eternal battle with Walter O’Dim, also known as the Man in Black, determined to prevent him from toppling the Dark Tower, which holds the universe together. With the fate of the worlds at stake, good and evil collide in the ultimate battle only Roland can defend the Tower from the Man in Black.

Not that he went anywhere, but it looks like Stephen King is making a come back. The T.V. show ‘The Mist’ has been running for over a month now, and of course the highly anticipated remake of “IT” is not far away. Sandwiched in between is “The Dark Tower,” based on one of King’s longer novels. While this movie doesn’t cover the whole novel, it introduces audiences to this strange universe King created.
And an introduction it is. While they fill the audience in on some things, it almost feels like something is missing from both the story, and the characters involved. The story follows a young boy, Jack Chambers (Tom Taylor), and the visions he has been having. He’s sure his visions are real regardless of the disbelief from the people around him. He draws things in his visions like the Gunslinger, Roland Deschain (Idris Elba).
One of the visions gives the audience background on Roland, in his last battle along side his father. Both of them have been in a long battle with the Man in Black (Matthew McConaughey), but that’s the only past battle that’s shown. With Roland having so much hate for him, it would have been nice to see more of their history. As for the Man in Black, they could have given the audience more information on his rise to power, and why he’s so determined to make the Tower fall.
Even though it would have been good to know more about these characters, they’re still pretty good at what they do. The Man in Black can make almost anyone do what he wants. He walks past people acting all cool, gives a simple command, and they do it. It also makes him pretty intimidating. Being a Gunslinger, it’s obvious what Roland is good at. While watching him shoot is good, it might be even better watching some of the ways he reloads.
Too bad it seems the audience doesn’t get enough of them. As mentioned, they don’t show much of them in the past, and limited interaction between them until the final scene. Going into the movie, it felt like there would be plenty of action, but there isn’t anything spectacular until the end. While the story follows Jack, maybe there would’ve been more action if it followed Roland. Then it could have covered the backstory better, and had more action in their world. Jack comes from the real world, and nothing much happens there early on. There's some decent humor when they return to the real world, but this isn't a comedy.
For those who haven’t read the novel, like myself, maybe it leaves you a little lost. It just felt like there should be more to this story. Being a long novel, it’s easy to understand them leaving stuff out, but it truly felt like they should have covered more. If they spent more time in the other world then maybe they could have covered more things. It would have made more sense, and definitely could’ve provided more action especially between Roland and the Man in Black. However, for those who read the novel, maybe it made enough sense, and therefore they did right by the story. Either way, I give “The Dark Tower” 2 pools of blood.