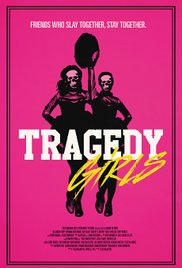 Tragedy Girls, a twist on the slasher genre following two death-obsessed teenage girls who use their online show about real-life tragedies to send their small mid-western town into a frenzy and cement their legacy as modern horror legends.

High schoolers Sadie (Brianna Hildebrand) and McKayla (Alexandra Shipp) are completely obsessed with trying to grow their Tragedy Girls social media accounts. They were hoping that following the case of the serial killer named Lowell (Kevin Durand) would get them some follows. However, they soon decide that Lowell just wasn’t cutting it anymore, and took over as the star killers in town. Their social media accounts get plenty of hits, but is “Tragedy Girls” a hit as well?
It doesn’t take long to see that this is going to be a fun movie. With a little plot twist to start, Sadie and McKayla quickly display they’re a perfect match. The best friends are clever in both their conversations, and plans to murder their soon to be victims. While their characters aren’t great roles models by any stretch of the imagination, their desire for a bigger social media following will certainly be relatable to many in the audience.
Don’t think for a minute that just because they’re teens that the kills won’t be bloody. While their plans are good, they aren’t always executed perfectly. This leaves for plenty of blood splattering scenes like in the school shop room. The girls prove to be well versed in killing, disposing of bodies, and cleaning up all while having little boundaries.
Brianna Hildebrand and Alexandra Shipp really do an excellent job in their roles. They pull off the times when they need to be average teens, and are definitely great when the killing begins. While the focus is obviously on them, don’t sleep on Kevin’s performance. He proves to be the perfect choice as the serial killer. Someone the audience can believe is a mean killer, but also make mistakes along the way. Also making an appearance in a little more serious of a role than expected is Craig Robinson, who plays Big Al.
Audiences should enjoy “Tragedy Girls” because it provides a great tandem of female leads along with a nice mix of horror and comedy. The story is well played out from the small twist at the beginning to the motivation behind their madness at the end. There is plenty of blood and guts, and strong acting performances all around. Ultimately, it may seem like watching a modern version of “Scream.” With that, I would follow, and “Like” “Tragedy Girls” on social media, and give it 4 pools of blood.

*Shown at the Popcorn Frights Film Festival*
Posted by HorrO at 11:22 PM