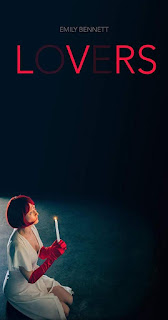 A magical realism/horror film that explores the paradox of why a woman chooses to stay in an abusive relationship.

Directed and written by: Emily Bennett

“LVRS” wastes little time in grabbing the audience’s attention, and never lets go. It opens with a woman in bed, and a man standing in front of it. The man looks completely normal except for the mirror that’s in front of his face. While it might shock the audience, it brings a smile to the woman who gets to see herself happy. This romantic moment is quickly interrupted by the ring of a red phone, and a young boy. As the film goes on, both the boy and phone are constant interruptions.
The interruptions might not be welcomed for the woman, but are for horror fans. The woman is tortured by the man each time the boy appears, and it will definitely make the audience cringe. She continues to smile into the mirror, as the man appears to make up for the torture with a romantic gesture. But how far will the woman let it go before enough is enough. Can she put an end to this before something really bad happens to her?
In a month where horror fans celebrate women in horror, here comes a short film about abusive relationships starring, written and directed by a woman. Make no mistake, Emily Bennett has complete control of “LVRS” both in front of and behind the camera. This short film says a whole lot with so little words. Who needs to speak when they’ve created some terrific imagery leaving a lot for the audience to interpret. What needs no interpretation is how romance is met with horror at each turn until the bitter end. There’s just something about this film that will keep your eyes glued to it, so please turn your attention to it below, and enjoy!