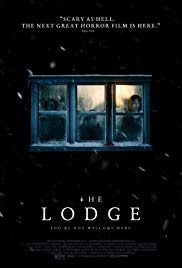 A soon-to-be stepmom is snowed in with her fiancé’s two children at a remote holiday village. Just as relations begin to thaw between the trio, some strange and frightening events take place.

As horror fans, we’ve seen a lot of horror movies featuring cabins in the woods. It usually sets up for a great blood and guts slasher type movie, but that’s not happening in “The Lodge.” Not only do we get a little bit of a different setting, but we also get a slow burn psychological horror movie. So should horror fans pay a visit to the lodge…lets find out!
Mia (Lia McHugh) and Aiden (Jaeden Martell) are young kids with parents on the verge of a divorce. Their father, Richard (Richard Armitage) has already moved on to a new woman, Grace (Riley Keough). The movie wastes little time in bringing a shocking event into their lives, while making sure they have the audience’s attention. Immediately the audience will feel for the kids, and the awkward situation their father is about to put them in.
Richard wants the kids to spend their Christmas with Grace at their lodge while he works. Of course the kids aren’t happy about this, and have little choice but to go to the lodge. However, before they go, they take the time to learn who Grace is, and find something very disturbing about her past. What’s effective here is learning about Grace, but slowly bringing her into the picture. The audience doesn’t get to see her until about twenty minutes into the movie, but the urge to see her sooner is there after finding out what she was a part of.
Speaking of effectiveness, another thing that works really well is the use of Mia’s doll house, or in this case replica of the lodge. She has it in her room at home, and the camera takes many close ups in it. Sometimes it’s hard to tell if they’re shooting from the real lodge, or the fake one. It adds a creepiness throughout, and definitely a constant feeling that this isn’t going to end well. Mia also has dolls representing the family in this fake lodge, which provide a ton of foreshadowing.
Going back to this carefully crafted story, things don’t get bad until Richard leaves. Grace struggles to get the kids’ attention, and something seems to be happening to her. She takes pills, and when they disappear so does stuff in the house. The tension builds as she desperately tries to befriend the kids, the conditions outside worsen, and more mysterious things happen inside. It gets to a point where the audience is just waiting for Grace to snap, but do they feel bad for her, or the kids at this point?
When the mystery is finally revealed, it doesn’t end there. The darkness that builds goes past the point of no return in pure horrific fashion. No this isn’t the typical cabin in the woods type movie. It’s an effective psychological horror movie that builds on its mystery, and tension. It presents a shocking beginning, and even darker ending with no fear. The story is put together well, including the interesting use of the fake lodge. The acting is solid, as they hide the movie’s secrets perfectly, and make the audience feel for all the characters involved at some point. With that I give "The Lodge" 3 pools of blood!