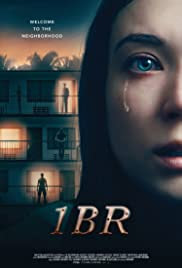 Sarah tries to start anew in LA, but her neighbours are not what they seem.

Directed and written by: David Marmor

Looking for a home can be a struggle for many people. Is it the right location, right size, good neighborhood, and of course the right price? Many of those things you can figure out while searching, but one of the big mysteries is always who your neighbors turn out to be. They might be nice when you move in, but then become the devil incarnate months later. Maybe that’s why the apartment building Sarah (Nicole Brydon Bloom) moves into in “1BR” has a tough screening process.
Sarah is new to LA so finding a smaller apartment seems like the right way to go. She stumbles upon an apartment building that appears to work for her, and passes their screening test. She moves in along with her cat even though that’s against the rules of the building. Most of the neighbors are really nice to her, and she gets acquainted with a few of them. Things are good to start except for some weird noises that keep her up all night. Not being able to get a good nights sleep stresses her out, but that’s nothing compared to what’s about to happen to her.
Besides the strange noises and an odd character or two, the evil that’s about to unfold on Sarah kind of sneaks up on the audience. Almost everything seems too good to be true, and it definitely is. Unknowingly, Sarah has stumbled upon a cult, and is left with little choice but to join them. These people appear so nice yet what they do to show her what happens when she brakes their first rule is quite a wake up call. That’s just the beginning of her long, and certainly painful introduction to her new family.
The cult is made up of some interesting characters with again most seeming very nice, but able to become very dark in seconds. Jerry (Taylor Nichols) is the leader, and makes sure the community works as it’s meant to. A leader must have a right hand guy that’s willing to do the dirty work, and that’s Brian (Giles Matthey). The audience will grow to hate them, but might struggle to hate others like the little old lady (Susan Davis) Sarah originally befriends. Along with Sarah, the audience will learn that no one messes with the bond between these crazy people.
All of those characters bring the horror to this story, but their is no doubt that Nicole’s performance as Sarah drives the film. They put Sarah in a situation that makes it easy for the audience to root for her, but Nicole plays it so smoothly it’s hard to tell how much influence the cult is having on her. It’s hard to get a read on her, and what she’s thinking especially when wondering if she will ever break free. There’s plenty of tough moments her character goes through, and Nicole nails all of them.
Moving is never a fun experience, and you never know how it’s going to turn out. Sarah moves in search of a new start, and boy does she get one. “1BR” sets up a terrific story where no one seems as nice as they really are in a community that’s out for only themselves. There’s mystery, tension, suspense, some cringe worthy moments, and some welcomed twists all leading to an exciting ending. It all comes together with great performances from everyone especially Nicole. She definitely makes the most of her opportunity to shine in this movie. With that, I give it 3.5 pools of blood.