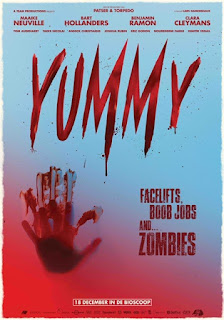 Alison (Maaike Neuville) already has the looks, but is looking for comfort when she heads off to an Eastern European hospital for plastic surgery. Joining her is her boyfriend Michael (Bart Hollanders) and her mother Sylvia (Annick Christiaens). Alison wants to have a breast reduction, while her mom also wants a face lift. Not long after arriving Michael seems to realize there might be something wrong with this hospital, and it’s about to get worse. Patients are about to look yummy to the growing number of zombies in “Yummy.”
There’s lots of good in this movie, and it might unexpectedly start with Michael. Yes, Alison is the reason they are there and gets plenty of screen time, but there’s just something refreshing about Michael. He isn’t the big and strong macho boyfriend, nor is he a complete nerd. He really is an average guy, who loves his girlfriend. Even better is how filmmakers aren’t scared to let him be clumsy while trying to be the hero on multiple occasions. It adds some good humor to the action.
Actually they do a great job of balancing the action with the humor. Besides Michael’s awkwardness, they make the most of them being in a plastic surgery hospital. One of the first patients Alison runs into once the zombies run crazy is a woman whose face is skinless. Of course no one will help them thinking she’s a zombie. And probably the best patient is the one who had penis enlargement surgery. He thinks he’s going to get a chance to try it out, but things go so wrong!
With plastic surgery gone wrong also comes some zombies, and plenty of blood splattering fun. There’s several good zombies here, but the ones that seem to be extra creepy are the ones crawling on the ground. There’s one that puts on a good chase even though they’re half a zombie. Yes, it has plenty of zombies eating people, people taking zombies down, and even some fighting between the survivors. One of the bloodiest scenes might be the old arm in the shredder trick, which is oh so painful to watch.
“Yummy” is yet another delicious addition to the zombie genre. It creates an interesting mix of characters, some to like, some to hate, and even one that can’t get out of their own way. Also, they do well with the opportunity to make some crazy scenes with patients who just had plastic surgery. There’s no shortage of zombies, or blood so you better not be squeamish. And after all the blood and laughs, it has a pretty shocking ending! So it’s good to remember that looks can go a long way, but won’t do you any good if you end up a zombie! With that, I give it 3.5 pools of blood!