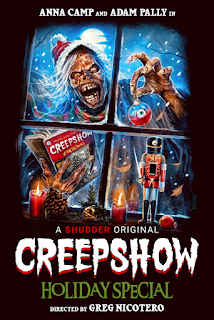 In the holiday themed, hour-long episode, “Shapeshifters Anonymous,” written and directed by Creepshow showrunner Greg Nicotero, based on a short story by J.A. Konrath (Last Call), fearing he is a murderer, an anxious man searches for answers for his “unique condition” from an unusual support group.

“Shapeshifers Anonymous” is an early Christmas present from Creepshow and Shudder. Someone has been murdering people around town, and Robert (Adam Pally) thinks he might be the murderer. How could he not know that he’s a killer? Well he has some hints to what could be happening, but he's having a hard time remembering what’s happening on certain nights.

In need of some help, he does what many of us do. He goes to a support group looking for answers to his problem. This is a unique group that should be able to help him. The group isn’t sure about helping him at first, but then they welcome him in. The group is led by a woman named Irena (Anna Camp), who helps introduce him to everyone, and begins to get to the root of his problem. 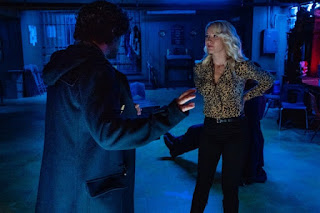 No spoilers as to what specifically happens next, but lets say this starts off with a lot of humor. It’s an unusual support group made up of some unusual characters. What’s unique about them is hilarious, and it will only get better. As a group they’re pretty funny interacting with each other, and make the most of welcoming in a newcomer.

It’s Christmas time, but this isn’t about them spreading holiday cheer. There’s plenty of blood and guts to come. Robert is going to find out what’s happening with himself, and as he comes to grips with that he’s about to find himself in a wild situation. A situation that gets crazier and crazier by the second including the final moments.

Overall, there’s a whole lot to say about this special episode of Creepshow, but not without spoiling it. What I can say is you’re definitely not going to what to miss it. Anna, Adam, and the rest of the cast do a great job in their roles. The episode starts with a lot humor and doesn’t let up. And in all the humor there will be plenty of holiday blood spilled. It all comes to an exciting, and very surprising ending! Watch it when it’s released December 18th, and watch it again on Christmas.