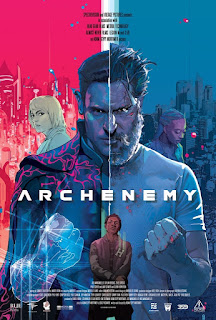 Max Fist (Manganiello) claims to be a hero from another dimension who fell through time and space to Earth, where he has no powers. No one believes his stories except for a local teen named Hamster. Together, they take to the streets to wipe out the local drug syndicate and its vicious crime boss known as The Manager.

In most superhero movies, to have an “Archenemy” means you should be a hero first, and that’s the big question here. Max Fist (Joe Manganiello) appears to be a homeless man just interested in drinking, and telling a wild story. A story about being a hero from another dimension, battling an archenemy, and losing all his powers when landing in the present day dimension. He seems to be just another lost soul until he crosses path with a young man named Hamster (Skylan Brooks).

Some might say Hamster is lost as well, but he’s just trying to find his place in this world. He believes he can do that by finding a big story to cover, and that story might just be about Max. Hamster takes the time to listen to Max’s story, and spends time with him hoping that his story is true and he can capture proof of it. Just when it seems like he might never get that proof his sister, Indigo (Zolee Griggs), finds herself in trouble with the drug dealer she has been working for. Their only way out may rest in the hope that Max truly is a superhero! 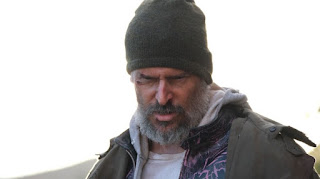 Many superhero movies are based on comics, and people are familiar with how the hero came to be. One of the many good things about this film is that it’s a new story to audiences, and one that spends a lot of time questioning whether the hero is really a hero. Yes, the audience gets to see some of Max’s story about being a hero in another dimension, but it’s done in comic/animated form. This animation mixes in well with the film, and doing it this way still leaves doubt about how real his story is.

While the attention starts on Max this movie is also about Hamster and Indigo’s stories as well. Like Max, they’re trying to find their place in this world. Hamster seems to be doing it the right way, even though he’s gambling a lot on Max being for real. Indigo takes more of a risk getting involved with a drug dealer, and soon enough takes a big gamble of her own. While sometimes the Marvel superhero universe moves things too far out of the real world these two characters, and even some aspects of Max, will give the audience things they can relate to. 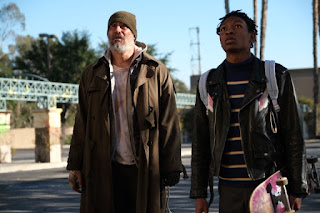 So if the audience doesn’t know if Max is a hero or not is there any action to look forward to? Yes, there’s a gradual build of action here. There’s some simple stuff Max does like face down a car, and then the good stuff comes once he decides to take on the drug dealer’s thugs. He manages to do it in a way that hints that he has powers, but still nothing that definitely says he’s anything more than a good fighter. One thing for sure is that he has no problem being violent, and beating the hell out of anyone. With a budget much less than a Marvel film they still manage to pull off a thrilling ending that answers questions for all those involved, and could leave the door open for a sequel.

Some may think of “Archenemy” as an enemy of Marvel films, but that isn’t necessarily the case. As mentioned there are differences like questioning Max being a hero throughout most of the film, and following relatable characters in a relatable setting. However there are similarities starting with the animation of Max’s backstory, and some of the events in the final act. There’s also strong performances given by Skylan, Zolee, and Joe who seems to fit this role nicely. In the end, it’s probably best to look beyond the comparisons, and enjoy what this story presents. With that, I give it 3.5 pools of blood.

More info about this film at: http://promotehorror.com/2020/11/13/archenemy-by-adam-egypt-mortimer-releasing-december-11th/